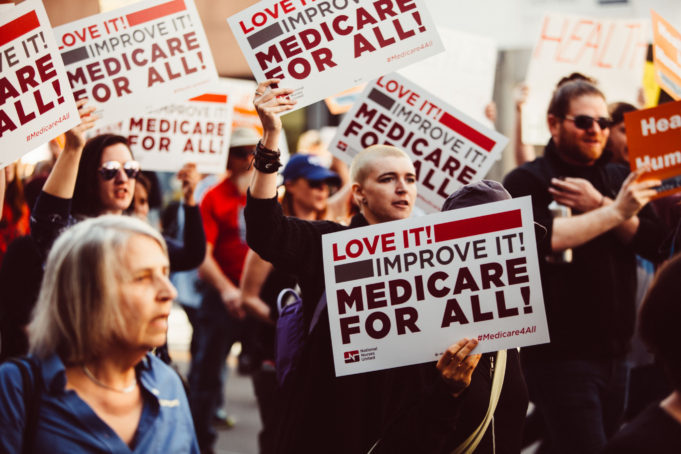 “Medicare for All,” a plan championed by Senator Bernie Sanders (I-VT) has been gaining motion as more and more progressives – members of the Democratic Socialists of America (DSA), et al. – win nominations for Congress and other elected positions across the country. Crazy Bernie never told us exactly how much his plan would cost, but luckily the Koch brothers have figured it out. The amount: $32.6 trillion – yes, trillion with a “T”.

The study, “The Costs of a National Single-Payer Healthcare System” conducted by the Mercatus Center of George Mason University, found that the Medicare for All Act (M4A) would, under conservative estimates, increase federal budget commitments by the above amount during its first 10 years of full implementation, 2022 through 2031, assuming enactment in 2018. The projected increase in federal healthcare spending would equal approximately 10.7 percent of Gross Domestic Product (GDP) in 2022, rising to nearly 12.7 percent of GDP in 2031, and further thereafter.

Although the plan would result in significant savings for the government with lower prescription drug costs, $846 billion over 10 years, and streamlined administrative costs, $1.6 trillion over 10 years, the Mercatus Center found that even doubling all currently projected federal individual and corporate income tax collections would still be insufficient to finance the plan.

For the 2016 fiscal year, nationwide healthcare expenditures – federal spending, state Medicaid programs, and private employer healthcare spending — totaled $3.3 trillion, which is basically on par as an average over the past few years. Over the next decade then, approximately $33 trillion will be spent on healthcare in the U.S. Vox says this is, “significantly more than Mercatus’s estimated $32.6 trillion cost to the federal government over the next ten years.

Sanders’ M4A plan would be “free at the point of service, and would not include any cost-sharing,” Vox says. They said Sanders took exception to the Mercatus report’s conclusion that the plan would lead to a drastic increase in taxes, calling the study “grossly misleading and biased.” Although the Koch brothers are known for their fierce advocacy for libertarian-based policies, the truth does not escape them.

The plan is ruinously expensive.

Progressives across the country have endorsed Medicare for All, especially the socialist charging the way in New York, Alexandria Ocasio-Cortez. She was asked about the costs of a single-payer system during an interview with “Daily Show” host Trevor Noah. She argued that the problem with instituting a single-payer system isn’t actually its high cost, but rather a resistance to change.

“The resistance to single-payer, especially among establishment Democrats, is really just resistance to changing the status quo. The Democratic party is supposed to be the one that believes government can and should help people. Single-payer, as Monday’s study confirmed, is the best way to do that — while also saving the government trillions of dollars!”

These, of course, are the people who paint the outside of crumbling buildings and call them “fixed.” These are the people who campaign on emotions and feelings, not facts and figures – if everyone feels warm and gooey on the inside, it doesn’t really matter how the plan works, just that there is one.

Paying for it? Someone has to – they don’t know who it is or how much, but they will in the end.

That is what progressivism, i.e. the road to socialism, i.e., the road to Communism, really is. It is forcing people to engage in something the don’t want, in this case paying for nationalized single-payer healthcare even if that person does not need or want it.

President Ronald Reagan once said: “the government does not solve problems, it subsidizes them.” In changing the status quo, the U.S. already has single-payer healthcare, it’s called the Department of Veterans Affairs. Just ask any vet how they think that’s going.