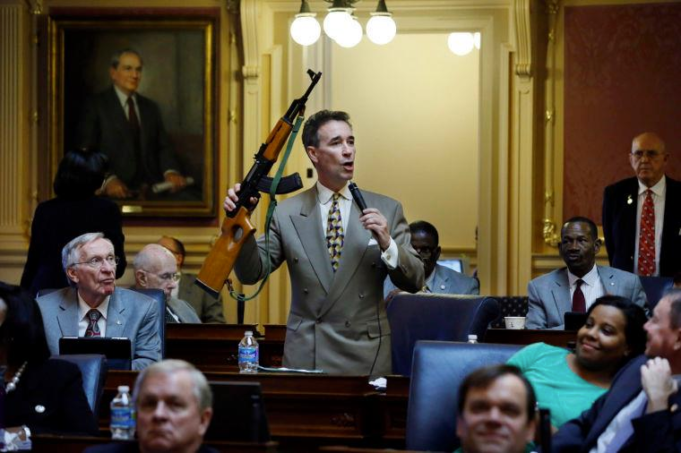 For those of you who have been longtime readers, you know of my affinity for former Delegate “Fighting Joe” Morrissey — the Democratic nominee for the Virginia Senate in SEN-16.  Pro-working class, sensible on fiscal issues, and above all else someone who has lived his pro-life values in the public square in a way few of us will ever have to do.

That’s right.  Morrissey is a pro-life Democrat; perhaps the last of of the old Democrats in the mold of Robert F. Kennedy who could truly be called a ‘liberal’ and not a progressive.

The Associated Press’ James O’Keefe did a quick write-up of his rise, fall, and altogether improbable rise — all against the designs of the Democratic establishment — in the Washington Post:

Morrissey has been disbarred twice, convicted for contributing to the delinquency of a minor, and canonized in Virginia history for punching a defense lawyer in 1991 while he served as Richmond’s commonwealth attorney. The last time he served in the General Assembly, he spent his nights in jail and his days representing constituents.

Yet, Morrissey swept the primary with 56% of the votes after running a campaign that put him directly in front of voters; going door-to-door converted into a surprising win. Now he seems surely bound for Capitol Square representing the 16th Senate District, which includes Petersburg and Hopewell, part of Richmond and parts of Chesterfield, Prince George and Dinwiddie counties.

Of course, Morrissey isn’t precisely a conservative in Democratic clothing.  Unlike the myth that was then-State Senator Ralph Northam who almost switched parties ten years ago, Morrissey remains very much to the left on questions such as gun control, environmentalism, and recidivism rates in Virginia’s prison system:

An analysis of his 2008-2015 legislative record shows Morrissey voted mostly with his party, according to the Richmond Sunlight database records. He championed legislation dealing with gun control, environmental policy and criminal justice reform, including a proposed constitutional amendment that would have restored civil rights to individuals convicted of felonies.

“There’s a coal ash pond 100 feet from the James River. Don’t think that it won’t seep into the river,” Morrissey said. “That’s why I’m against simply capping — putting a cover — over toxic coal ash and saying that everything is going to be okay — it’s not going to be okay.”

Needless to say, Morrissey isn’t shy about his free agency after the old Byrd Machine actively conspired to drive him out and destroy the man openly in the public square — a slight that Morrissey in public may play coy towards, but ultimately is one that both he and his constituents remember:

Democrats eager to flip the Senate may rest easier when they hear his policy positions, but Morrissey is careful to note that constituents are his primary concern.

So what does this mean for Republicans?  Morrissey is first and foremost a Democrat, to be sure.  One doubts that in a 20-20 chamber or a 21-19 chamber that Morrissey will vote for either a centrist or a Republican president of the Senate, all things being even.

Yet there are lessons here as Republicans continue to woo African-American voters who are quite frankly tired of being patronized by both parties.

Morrissey, whose legal career has been predicated on working within black communities, understands this in a way few in Virginia do — and he understands it not by patronizing communities but by serving them as co-equals — honestly and up front.

Turns out that Morrissey’s Catholic background serves him well in this regard, much as RFK’s Catholic background helped him reach beyond class and color barriers.  Morrissey’s pro-life bona fides really do translate into support for things that many in his community want — a robust education system that isn’t a handout or jobs program, care for our common home and protecting the environment, opportunities rather than programs, and a particular sensitivity to those most in need of society’s protections: those in prison, those in poverty, or those in need.

There’s the catch for Republicans.  Morrissey’s concern?  Is authentic… to the point where he has devoted his life towards such ideas.

Best of luck finding those voices in the Republican Party — yet, that is.