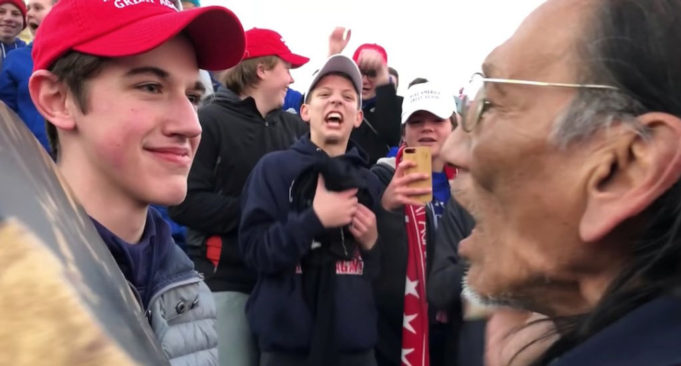 This hasn’t exactly been a good week for the inquisitors of the American left.

The telltale cracks in the edifice of the Fourth Estate continue to demonstrate that ethics-in-journalism is more contradiction rather than rule.  First the repudiation of a Buzzfeed story from none other than Mueller himself, and then the expose of a classic tried-and-true tactic of outrage mob via Twitter against Catholic students accosted by agitators in front of the Lincoln Memorial.

Of course, this didn’t stop the legacy media from taking trending Twitter accounts (bots and all) and turning them into one of the most brazen cases of public defamation since l’affaire Kavanaugh was sprung on the American public.  Coincé du cul, the press simply cannot bring themselves to terms that they themselves might be the problem.

Jim Geraghty over at National Review summarizes the fears of most people when we observe the leftist outrage mob in action:

No hostile foreign power had to invade to impose these conditions upon Americans. No sinister cabal took control of the reins of our government. No one tore up the Constitution and imposed martial law or suddenly announced a new regime of seemingly random spotlighted surveillance and draconian social punishment for deviating from the mob’s amorphous definition of acceptable behavior. Groups of not-particularly famous, not-particularly powerful Americans chose to impose this new system upon all of us.

Alexander Solzhenitsyn, the anti-communist writer who exposed the endgame of the socialist order in The Gulag Archipelago, opined on this curious fact of Western life in his recently published diaries with the “outrage mob” before technology amplified its reach and preponderance:

And here I clashed with the Western media in its frenzied rampage as it watched and stalked and photographed my every move.  I had not bowed bye fore the formidable Soviet Dragon — was I now to bow and scrape before these journalists in the West?  Were they to ensnare me with glory?  I did not need it!  I had not clung to Khrushchev’s orbit even for a week, nor would I cling to theirs.  All these methods disgusted me.  “You are worse than the KGB!”  My words instantly resounded throughout the world.  So from my first days in the West I did much to ruin my relationship with the press; a conflict that was to continue for many years had begun.

Thus, instead of a free and enlightened West resisting the lie, we find ourselves reveling in the spectacle, the roots of which may be partly within the American public, but have long roots in the Western media apparatus.  Simply put, mob reporting is an old vice amplified by those who have long profited from its exercise.

Safe to say that, with all the information in hand an a video exonerating the students, the fire has reduced to smoldering embers and a series of excuses. Most pernicious of these are the claims from the left that, by wearing the MAGA hats, they invited the mob.  Whether one subscribes to the “if she didn’t want it, she shouldn’t have been wearing that dress” line of argumentation says more about the character of those who make it than the students themselves, who have reacted far more admirably than the Diocese of Covington who reacted with a speed shockingly withheld in cases such as McCarrick and other sex abusers.  In either event, wearing a hat shouldn’t become an invitation for defamation and doxxing, much less violence.

Yet I digress.  The entire episode between the students of Covington Catholic School, the agitators of the Hebrew Israelites who accosted them, and the attempts of Mr. Phillips (the indigenous person who attempted to interpose) has been well debunked.

The actual course of events?  Phillips walked into a crowd of kids. Beats a drum within inches of this kid’s face who refuses to be moved or intimidated. Teenagers clap, laugh, and join along. No one gets hurt and no one says anything stupid.  Well, almost… as the agitators continue to bait the students with lines such as  “White people, go back to Europe where you came from!”  This of course is politely ignored… why ruin a narrative, after all…

This is the immediate reason why conservatives should refuse to let this instance go, precisely because the inquisitors of tolerance refused to live by their own creed.  There is zero minus reason why we should succumb to the “pox on both your houses” cliché, if for no other reason than this isn’t about the kids and the drummer — this is about one side overreacting and falling for a lie.

…and not just falling for a lie, but becoming a violent mob, with some (not a few) wishing harm to innocent people. This is not a situation where there is blame to go around. Assume that everyone in the videos you have seen was acting in good faith.

The reaction is the story.

Many people jumped onto this story being willing and open to additional information and reverse course. They should be proud — and we should all strive — to be so open minded.

If you found yourself as one of those who advocated violence against the kids in this situation because of what you wanted the story to be and still do, you should be ashamed. You may not feel shame. You may hide it in excuses that are in reality little more than racism.

But you are the problem.

C.S. Lewis may not be as widely read by Americans as he once was, but his admonishment about those who are disproven in their hatreds remains apropos:

Suppose one reads a story of filthy atrocities in the paper. Then suppose that something turns up suggesting that the story might not be quite true, or not quite so bad as it was made out. Is one’s first feeling, ‘Thank God, even they aren’t quite so bad as that,’ or is it a feeling of disappointment, and even a determination to cling to the first story for the sheer pleasure of thinking your enemies are as bad as possible?

If it is the second then it is, I am afraid, the first step in a process which, if followed to the end, will make us into devils. You see, one is beginning to wish that black was a little blacker. If we give that wish its head, later on we shall wish to see grey as black, and then to see white itself as black. Finally we shall insist on seeing everything — God and our friends and ourselves included — as bad, and not be able to stop doing it: we shall be fixed for ever in a universe of pure hatred.

Thomas Jefferson, in a letter penned to John Adams in 1821 in their now famous correspondence, inquires likewise:

This country, which has given to the world the example of physical liberty, owes to it that of moral emancipation also, for, as yet, it is but nominal with us. The inquisition of public opinion overwhelms in practice the freedom asserted by the laws in theory.

Subject opinion to coercion; whom shall you make your masters?  If Jefferson’s concern in Notes on the State of Virginia transpose for his eventual negative disposition towards newspapers and media in general?  This inquisition of public opinion — tasted by Solzhenitsyn, rejected by Jefferson, mused at by Lewis, and now held firmly by the high priests of tolerance — should shock and revile many, if not all of us.

Tolerance, so it seems, means never having to say you are sorry.  Fact of the matter is, the real story isn’t what happened in Washington, but what happened on Twitter.

One may not feel shame.  But you should.