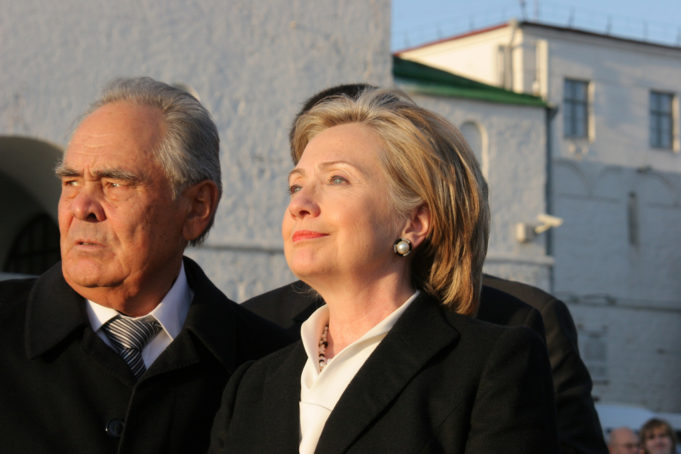 New revelations in the controversial Uranium One deal have come forth via testimony to a congressional committee from an FBI informant, sparking further contention between Republicans and Democrats and U.S.-Russian relations.

According to a report from Fox News, Russian officials in Moscow paid a U.S. lobbying firm million of dollars in a bid to influence former Secretary of State Hillary Clinton, funding her husband President Bill Clinton’s charities. The Uranium One dealings occurred while Clinton was a part of the Obama Administration.

Uranium One is a Canadian mining company that was sold to Rosatom, a Russian state-owned uranium monopoly. The deal was approved in 2010.

The informant, Douglas Campbell, gave a 10-page statement to the Senate Judiciary Committee, House Intelligence Committee, and House Oversight and Government Reform Committee regarding dealings with Uranium One. He was also interview for several hours by lawmakers from the committees to unearth the alleged ties between the Clintons and Russian officials.

In a report from The Hill, Campbell stated that Russian officials hired APCO Worldwide, a U.S.-based public affairs and strategic communications consultant firm, to filter money to the Clinton Global Initiative to influence U.S. foreign policy and aid U.S.-Russian relations.

The U.S. government gained interest in the Uranium One deal due to the fact it would give Russia an interest and further control of domestic supplies of uranium. In 2017, it was found that the FBI had evidence as far back as 2009 that Russian officials used bribes to expand Russian control of U.S. uranium deposits.

According to the report, Campbell explained Russian nuclear officials, “told me at various times that they expected APCO to apply a portion of the $3 million annual lobbying fee it was receiving from the Russians to provide in-kind support for the Clinton’s Global Initiative.”

The fee included, “four payments of $750,000 over twelve months,” Campbell said in the statement. “APCO was expected to give assistance free of charge to the Clinton Global Initiative as part of their effort to create a favorable environment to ensure the Obama administration made affirmative decisions on everything from Uranium One to the US-Russia Civilian Nuclear Cooperation agreement,” he added.

The informant provided Congress a memo on April 16, 2010, showing Russian efforts to aid Iran’s nuclear proliferation. Under the direction of the FBI, Campbell was gathering evidence that Russian was, “helping Iran build its nuclear capability.” “TENEX continues to supply Iran fuel through their Russian company,” Campbell’s statement reportedly detailed.

APCO released a statement earlier this week claiming ties between work with the Clinton Global Initiative and TENEX, a Russian exporter of initial nuclear fuel cycle products, are, “unconnected in any way.” They also stated that Campbell’s assertions are “false and unfounded.”

In the report, Campbell also described in his statement an earlier meeting with Russian officials outside Washington where they, “boasted about how weak the U.S. government was in giving away uranium business and referred to then-President Barack Obama ‘with racial epithets’.”

Victoria Toensing, the lawyer for FBI informant Campbell, was featured on “Hannity” Wednesday night and spoke about the findings. On the show, Toensing explained her client has shown congressional committees that there is a “strategic plan” being crafted by Russian President Vladimir Putin to “take over the uranium industry,” in the U.S.

Sara Carter, a Fox News contributor, said that when the deal happened, “the Russians were still double dealing with Iran.” Carter explained the biggest concern for Republican lawmakers at the time was that then-President Obama decided to ignore ties between Putin’s Russian nuclear program and that of fierce U.S. enemy Iran and go forth with approving the deal for Uranium One.

Furthermore, the report stated the Russians were apparently “so confident” with getting assistance from the Clintons that getting the deal approved by the Committee on Foreign Investment in the United States (CFIUS) that it was a “shoo-in.” “They [Russians] were so confident in that that they even had him [Campbell] open up the new office because they were planning on the kind of business they were going to do as soon as CFIUS approved it.”

Toensing was also explained that Campbell, during his investigation directed by the FBI, “was told that President Obama had it in his daily briefing twice.”

Congressional Republicans have motioned for a further investigation into Uranium One. Attorney General Jeff Sessions is reportedly looking into appointing a special counsel to probe the alleged ties between Uranium One and the Clinton Foundation. Democrats have disregarded the news of political impropriety, saying the allegations are only “wild claims” against the Clinton Foundation.