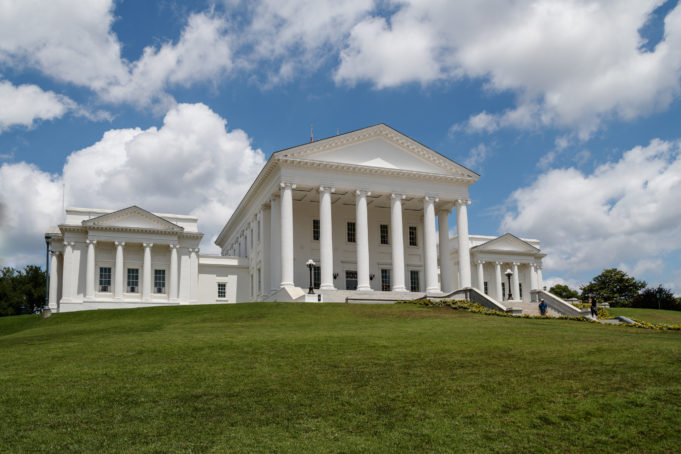 In tomorrow’s special election in the 24th House District, voters will choose between Rockbridge County supervisor Ronnie Campbell and liberal political activist Christian Worth to fill the seat in the lower chamber after Congressman-elect Ben Cline‘s (VA-6) win in the November midterm elections. On December 18, Republican voters will look to protect the one-member GOP majority in the House, with Democrats looking to make it a 50-50 split going into the 2019 General Assembly session in Richmond starting January 9.

Campbell, the Republican candidate, touts a career in law enforcement, public safety, and local elected positions, which he says makes him the most qualified candidate to represent the area in the House of Delegates. Worth, the Democratic candidate, has explained that she has been running a grassroots campaign to highlight popular issues in the western Virginia district that encompasses Amherst, Bath, Rockbridge, and southern Augusta counties and the cities of Buena Vista and Lexington.

Originally from Louisville, Kentucky, Worth is a Lexington-based political activist with experience in positions with the Lexington City Democratic Committee, running voter outreach, and organizing with the local Community Anti-Racism Effort (CARE) division. Her career also includes a two-decade stint as lawyer from her home state.

An Augusta County native with a 25-year career as a Virginia State Trooper, Campbell began protecting communities first in Northern Virginia before transferring to Rockbridge County. He retired from the state police force in 2003.

In 1996, he was elected to the Rockbridge County School Board, serving for 10 years, five of which were as chairman. In 2012, Campbell was elected as the South River District Representative on the Rockbridge County Board of Supervisors, serving as chairman for his first two years on the board, where he is currently in the third year of his second elected term. He  currently sits on the Rockbridge Area Network Authority (RANA), the Virginia Horse Center, the Chamber of Commerce, Tourism Board, Solid Waste Committee, and the Personnel Policy Committee.

Pre-election campaign finance reports submitted last Tuesday show that Campbell has the fundraising lead with $50,757 put into his campaign so far, according to the Virginia Public Access Project (VPAP). Democratic challenger Worth has raised $36,268 during the same time period, receiving a large portion of her funding from the Democratic Legislative Campaign Committee (DLCC) and the Democratic Party of Virginia, VPAP shows.

A few issues Worth has been running on are increasing broadband access in rural areas, supporting Medicaid expansion, and promoting clean energy, which includes being vehemently opposed to the Atlantic Coast Pipeline (ACP) that would cut through the district. She also boasts an endorsement on her campaign website from Senator Tim Kaine (D-VA), which may not fair out well in a district that voted between 59 and 69 percent for Corey Stewart in the 2018 Senate election in all areas but Lexington, which voted 71 percent for Kaine, according to the Virginia Department of Elections (ELECT).

Campbell says he wants to increase federal funding to pay for the $3.3 billion in projects the Commonwealth Transportation Board (CTB) sent to the General Assembly this month to improve roadway infrastructure along the Interstate-81 corridor. The Rockbridge County Supervisor said he does not support tolls or tax increases to pay for the upgrades.

Following over 80 bills filed in this year’s 60-day session that sought to place restrictions on gun ownership from the Democratic wing of the state legislature, the National Rifle Association (NRA) has endorsed Campbell, a sign that he will work against progressive firearm legislation. Furthermore, Campbell has said that he will fight to keep taxes low after Democrats proposed hundreds of millions of dollars in wasteful government spending in early 2018.

In early December, the DLCC announced they would contribute $1 million to Democrats to regain the majority stake in the state legislature, working to give Governor Ralph Northam (D) a clear line towards accomplishing his agenda. Regardless, since the mid-1990s, the 24th House District’s Republican performance in state and national general elections has been at least 56 percent. Cline, who will succeed retiring 13-term Congressman Bob Goodlatte (VA-6), won with 60 percent of the vote on November 7.