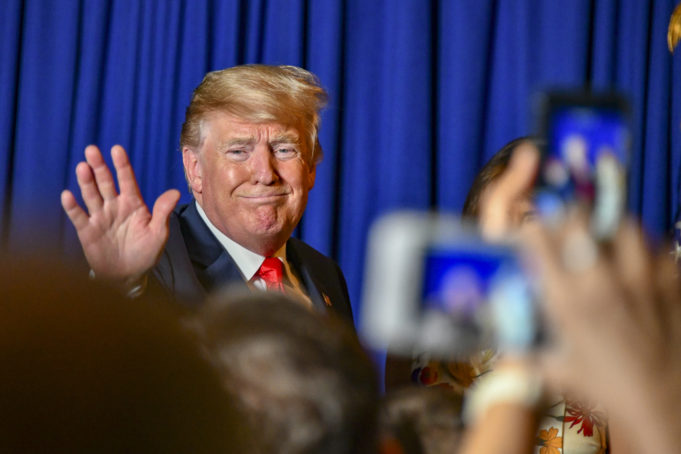 Although President Donald Trump is facing a new Democratic majority in the House of Representatives, a loss on the nation’s longest-ever federal government shutdown, and encroaching investigations in Washington, he seems to be confident in his chances of winning re-election in 2020, especially banking on the chaos currently consuming the Commonwealth of Virginia.

To recap the week-long madness in the Old Dominion:

Governor Ralph Northam (D) reportedly appeared in a photo that surfaced last Friday in his 1984 Eastern Virginia Medical School (EVMS) yearbook either in blackface or in KKK robes. He first confirmed that he was in the photo – not saying which one – then backpedaled the day following at a very odd press conference, which included an attempt to “moonwalk” in front of reporters and his wife, Pam, telling him “inappropriate circumstances.”

Attorney General Mark Herring (D) admitted to wearing blackface to look like a black rapper at a party at the University of Virginia in Charlottesville in 1980. His admission came Wednesday morning after he previously called for Northam’s resignation for also appearing in racist photos.

Even though Virginia has trended further Democratic in recent elections, which led to one-member majorities in both houses of the state legislature in 2017, and a 7-4 Democrat-Republican dichotomy for its congressional representatives in the 2018 midterm elections, the widespread scandal has the potential to dig very deep in Virginia’s Democratic Party and their voter base.

In the 2016 presidential election, Trump lost Virginia to Democratic presidential nominee Hillary Clinton by just over five percent, or 221,030 votes, according to the Virginia Public Access Project (VPAP). While some may believe that Virginia is officially “blue” and will always remain as such, that five percent gap from the last election could very well be erased as the Commonwealth’s top Democratic officials continue to make national headlines for racial and sexual controversy.

In addition to the Democratic Party’s attempt to push a shocking late-term abortion bill and Governor Northam’s subsequent “infanticide” comments – which was mentioned by President Trump in his State of the Union address – Virginia may be back as a battleground state in 2020.

On Twitter, the commander in chief aired his confidence that the racial and sexual scandals roiling Virginia’s executive branch will push voters away from the Democratic Party in the 2020 General Election. 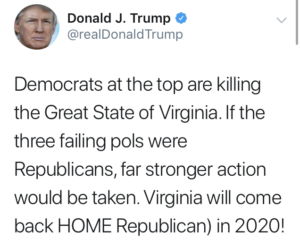 “Democrats at the top are killing the Great State of Virginia. If the three failing pols were Republicans, far stronger action would be taken. Virginia will come back HOME Republican) in 2020!”

Moreover, in the run-up to 2020, Trump has been outspending many Democratic presidential contenders on social media advertisements – “big league.”

For months, Trump’s 2020 campaign has consistently been a top political spender on Facebook. For example, over the last three weeks, the president’s re-election campaign spent a combined $778,000 on Facebook ads alone, compared to $194,000 from Senator Kamala Harris (D-CA), and just $99,000 from Senator Elizabeth Warren (D-MA), according to a report from The Hill.

At the national level, Virginia has voted for a Democratic presidential candidate for the past three cycles. However, the Commonwealth voted Republican for 10 consecutive cycles before that.

Although Northern Virginia accounts for many of the Democratic votes cast in the Commonwealth, burgeoning suburban and ex-urban areas are relatively new enough that Republicans can gain back ground.

As the GOP is set to defend and even gain on their slim majority in the House of Delegates and State Senate in the November elections – when all 140 legislative seats are up – the results could be an example for what may be expected one year later.