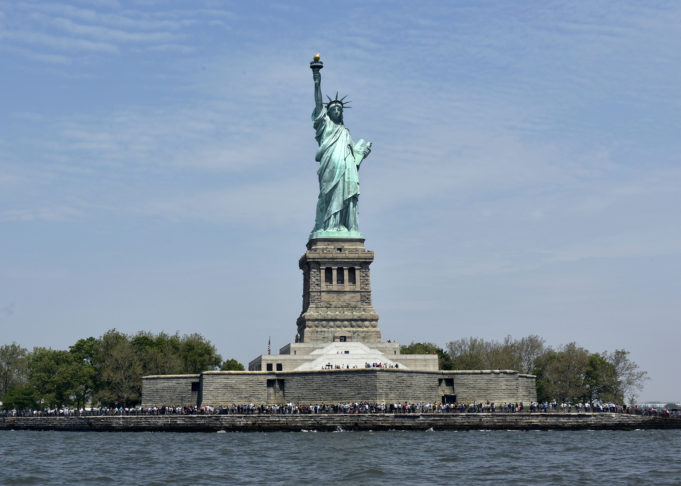 President Donald Trump announced on Wednesday that “DREAMers”, protected under the Obama-era Development, Relief, and Education for Alien Minors Act, will be viable for a path to citizenship. The DREAMers were brought to the U.S. illegally as young children by their parents and now face deportation. After many have been wary about his stance on the matter, President Trump told reporters, “Tell them not to be concerned. Tell them not to worry. We will solve the problem,” when questioned if whether they faced deportation or a deal from Congress is in the works.

The president wants legislation that allows young immigrants to be granted legal status and an inevitable path to full citizenship in 10 to 12 years. On Monday, the White House claimed a proposal including revised limits on legal immigration and appropriated funds for the southern border wall will be sent to Congress soon. This marks a new expression from President Trump regarding the future status of young immigrants who came to the U.S. via foreign parents.

The Republican House majority opposes any proposals that grant amnesty, while the Democratic faction resists any restrictions on immigration from the Trump Administration and funding the border wall with Mexico. Though, according to the president’s remarks, it seems he his very committed to finding a fix to immigration and ensuring a favorable status for DREAMers as Congress has yet to solve the controversial issue.

President Trump has continually demanded over $20 billion for the border wall. According to a report from the L.A. Times, the commander-in-chief told reporters at the White House he now wants $25 billion in funding. In addition, $5 billion has been requested for subsequent border security measures including more border patrol agents. As for the campaign promise of a 30-foot wall lining the entire southern border of the U.S., Trump explained the barrier could include improved fencing while utilizing natural barriers. This would greatly improve security measures in tandem with the approximately 700 miles of fencing now protecting the U.S.-Mexico border.

Accompanying the border wall, President Trump has also requested that a subsequent border security bill to include increased authority for deportation agents, curbs on the ability of citizens and legal residents to sponsor relatives to resettle in the U.S., and ending the visa lottery.

The White House and Republicans in the House and Senate are now quickly crafting legislation to devise an alternative for the Deferred Action for Childhood Arrivals (DACA) Act. This comes just under a week after the government was re-opened after a 69-hour shutdown when Democrats in both houses of Congress agreed to fund the government until February 8 for an immediate vote on DACA.

On Wednesday, a 36-member bipartisan group of senators held a meeting to discuss immigration reform and a subsequent deal for DREAMers. In reference to the president’s recent comments on the matter, Senator Lamar Alexander (R-TN) said there are “encouraging signs” for a legislative fix. As well, Senator Lindsey Graham (R-SC) praised the president, claiming his commentary, “represents presidential leadership on immigration that will allow us to solve a difficult problem.” Furthermore, even avid anti-Trump political leader Senator Dick Durbin (D-IL) approved of the president’s moves. “The president is headed in the right direction here,” he said.

White House Press Secretary Sarah Huckabee Sanders told reporters early on Wednesday, “The president wants to lead on this issue, and that’s exactly what we’re going to do.” She explained to reporters that White House officials encouraged Senate leaders to head up the legislative issue based on President Trump’s framework, addressing DREAMers and limits to both legal and illegal immigration.

The remarks from President Trump show signs that an immigration fix is coming quickly. After the heated exchanges between both parties in Congress that led to the government shutdown, Democrats have indicated a willingness to compromise. Though, if the Senate cannot agree on a final measure, Majority Leader Mitch McConnell has stated he would allow members to debate on the policy and his open to subsequent amendments.