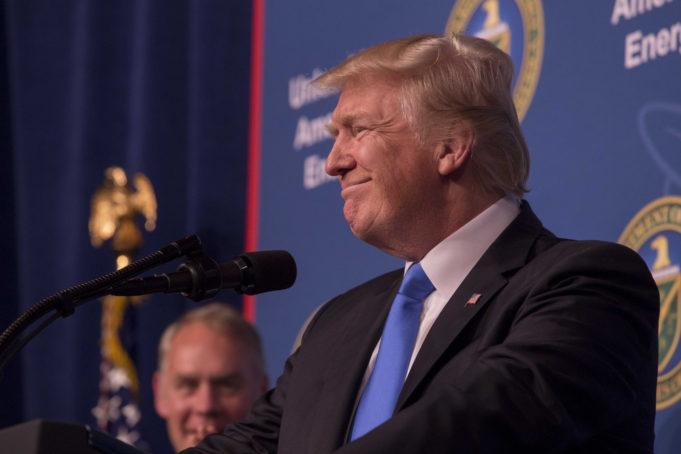 President Donald Trump fired off a series of tweets this morning to pressure Democratic congressional leaders into supporting his demand for billions of dollars to build a southern border wall. As well, he even threatened to have the U.S. military build it as Democrats, led by Senate Minority Leader Chuck Schumer (D-NY) and the presumed incoming speaker of the House of Representatives Nancy Pelosi (CA-12), get in the way of one of his campaign promises.

The comments by the President come just hours before Schumer and Pelosi were to meet at the White House with Trump to avert a partial government shutdown on Friday, December 21.

In a series of messages on Twitter, also referencing previous caravan of Latin American migrants making their way to the U.S.-Mexico border, President Trump said:

“Despite the large Caravans that WERE forming and heading to our Country, people have not been able to get through our newly built Walls, makeshift Walls & Fences, or Border Patrol Officers & Military. They are now staying in Mexico or going back to their original countries…….

…..Ice, Border Patrol and our Military have done a FANTASTIC job of securing our Southern Border. A Great Wall would be, however, a far easier & less expensive solution. We have already built large new sections & fully renovated others, making them like new. The Democrats,…..

….however, for strictly political reasons and because they have been pulled so far left, do NOT want Border Security. They want Open Borders for anyone to come in. This brings large scale crime and disease. Our Southern Border is now Secure and will remain that way…….

…..I look forward to my meeting with Chuck Schumer & Nancy Pelosi. In 2006, Democrats voted for a Wall, and they were right to do so. Today, they no longer want Border Security. They will fight it at all cost, and Nancy must get votes for Speaker. But the Wall will get built…

….People do not yet realize how much of the Wall, including really effective renovation, has already been built. If the Democrats do not give us the votes to secure our Country, the Military will build the remaining sections of the Wall. They know how important it is!”

Trump, who wants at $5 billion for the next funding package, reiterated that both Schumer and Pelosi do not want to pursue the border wall because of the Democratic Party at-large. Meanwhile, the liberal faction has called the proposed southern border wall both ineffective and too expensive.