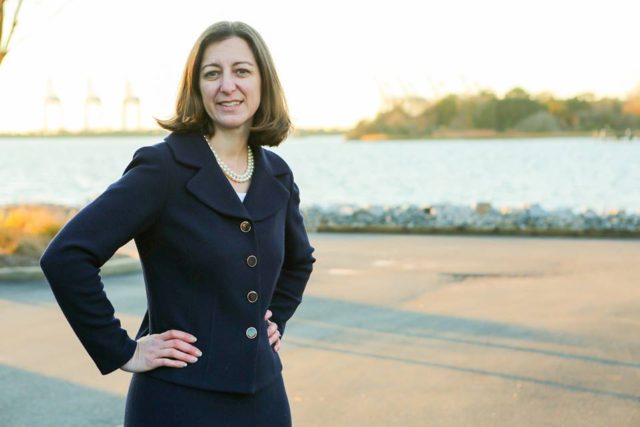 Virginia’s 2nd Congressional District based in Hampton Roads elected former Navy Seal Republican Scott Taylor in 2016. However, among Virginia’s large blue wave following the presidential election, Governor-elect Ralph Northam carried the area on his way to victory. Considering it is a continual swing territory now, Democrats are beginning to mount a relentless (if haphazard) charge to unseat the freshman congressman.

For years, Democrats have struggled with asserting a major political foothold in the military-heavy district. They now rest their hopes on retired naval commander and small business owner Democrat Elaine Luria.

…though it seems the Democrats have decided to put their trust in someone who actually isn’t a Democrat.

In a Facebook post from the State Conservative Reform Action PAC (SCRAPAC), there was a robo-call that was made in Virginia’s 2nd District to potential voters regarding the past voting history of Democrat candidate Elaine Luria. Here is a text version of the message, originally posted on Soundcloud:

“I’m calling with an urgent message on behalf of SCRAPAC about Democrat Elaine Luria. Elaine Luria is announcing she will run for Congress against incumbent Republican Congressman Scott Taylor. According to records, Elaine Luria voted in the 2016 Republican primary that Congressman Scott Taylor won. Did she vote for Scott Taylor or Randy Forbes? Both Taylor and Forbes supported building a wall to stop illegal immigration, repealing and replacing Obamacare, and confirmation of pro-life federal judges. So whether she voted for Scott Taylor or randy Forbes, as Democrats can you really trust Elaine Luria to stand up for your values? Is call was paid for and authorized by SCRAPAC…”

It is also important to note that there is not one place on Elaine Luria’s candidate site, Facebook page, or Twitter account that states she is a Democrat or resists the president as so many liberals like to exclaim.

So whom did Luria vote for?  Navy Seal and veteran Scott Taylor?  Or so-called “anti-gay bigot” Randy Forbes?

Moreover, her policy points aren’t exactly favoring the “Feel the Bern” crowd. Elaine Luria is someone who wants a strong military and is seeking to improve the nation’s infrastructure in front of giving away America’s tax dollars. Interestingly, the phrase “Make America Great Again” seems to come to mind.

Perhaps Luria is the most liberal candidate the Democrats can put forward in VA-02?  This seems likely given the military-oriented nature of the district.  Yet Luria’s Republican background seems oddly anachronistic against the “Big Blue Wave” theme that progressive Democrats have been pushing in northern Virginia and among the media.

Case in point?  On her campaign webpage, Luria claims that, “…too many Americans are working hard and getting less.” This sounds a lot like what President Donald Trump was shouting to crowds of 20,000-strong during his campaign.

Surely, Democrats don’t want that.  Or maybe they do.