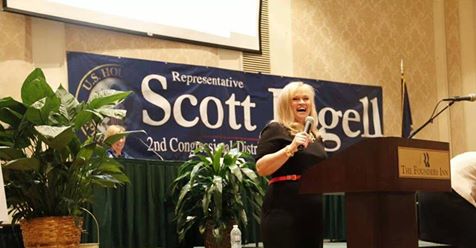 Left-wing blog Daily Kos is up in arms at Virginia Beach Democrats.  The blog reports that they just elected a Republican as their new Democrat Chair.

Apparently, the new VB Democrat Chair has supported a whole lot of Republicans.

An anonymous Twitter account tweeted photos of her Facebook posts speaking from the podium at a Scott Rigell campaign event, smiling with Bob McDonnell, and hoping Rigell runs for US Senate.  “At the Rigell Victory Party, Keep your fingers crossed for a win!”.  A post on Rigell’s page by her said “Congratulations!”  The report cited “wining and dining” at the Governor’s mansion with Bob McDonnell.

Looks like Susan Hippen lost to a Republican again.

It goes on to say that the new Chair started blocking Democrats who retweeted the photos of her, and removed “Lucas A. from a leadership position developing the committee’s website.”

According to the story, Hesseltine claims to be a lifelong Democrat and her husband was the Republican  (See, this must be what Hillary was talking about) and she was just “tagging along.”  Speaking from the podium = tagging along.

Several commenters on the story urged her to be not only kicked out as Chair but kicked out of the Democratic Party entirely.

Local media has been silent on the drama so far.  But it is significant in that Democrats think they have a shot at winning the VB-based Second Congressional District race this fall.  With their frontrunner voting for Scott Taylor for Congress twice in 2016 and the new VB Democrat Chair spending years supporting Republicans, one might wonder if any of that will excite the Democrat base to Glenn Nye 2010 levels.

And if Democrats oust their newly-elected Chairman, the effort might collapse before it gets started.

Grab some popcorn.  This will be fun!