After weeks of racial and sexual scandal surrounding Virginia’s Democrat-led executive branch, the backlash over the highly controversial late-term abortion bill, and subsequent “infanticide” comments from Governor Ralph Northam (D), Republicans are feeling quite good about their shot at holding onto control and even gaining seats in the General Assembly this November. This revitalized attitude as campaigning commences shows that the battle for the House of Delegates, which currently sits at a 51-49 GOP majority, is being fought on clear Republican terms, leaving Democrats playing defense.

“There’s a lot of chaos on the other side. You just can’t get around that,” said House Speaker Kirk Cox (R-Colonial Heights) in a recent report from The Washington Post. “The Democrats are going to struggle because those scandals are still ongoing.”

In most competitive House districts across the Commonwealth, Republicans have outspent Democrats two-to-one on digital media via Facebook since the November midterm elections. From then, $24,201 has been spent by Republicans, compared to just $10,021 by Democrats, according to figures from the progressive group ACRONYM. 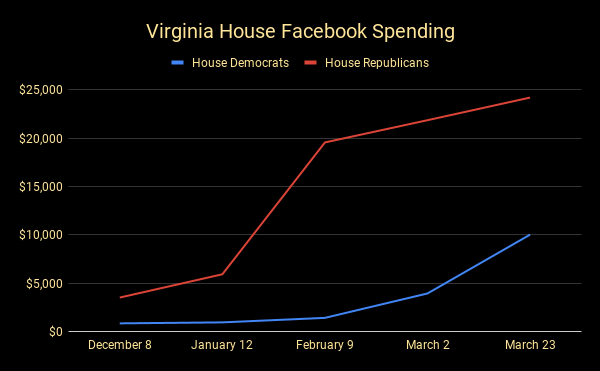 Additionally, just minutes after the conclusion of the 46-day legislative session in late February, the House GOP released a ferocious YouTube ad contrasting the national coverage of Democratic scandals with local television reporting on Republican legislation to bolster security in schools, nearly $1 billion in tax cuts, and autism healthcare coverage.

“Virginia’s choice is clear: chaos and embarrassment,” a narrator stated in the video, “or leadership and results.”

Considering Google only publishes spending from federal campaigns, there is no way to know how much in dollar figures that Virginia Republicans benefited through the advertising, but it revealed that Democrats began campaigning from behind.

Due to their early defining of the 2019 election season and strong online offensive, GOP committees and candidate campaigns have forced Democrats to focus their time and money on protecting their vulnerable party members from attacks by the Republican Party. Therefore, Democrats have not run a single attack ad against any Republican incumbent – those the liberal party must flip to overtake the majority for the first time since 1998.

In the run-up to November 5, Republicans are also backing a barrage of more diverse of candidates in suburban districts, with seven of their top 10 recruits being women or minorities. Furthermore, the GOP will build on this year’s legislative session that saw the promotion of “kitchen table” issues such as college affordability, school safety, teenage vaping and smoking, and foster care reform to prove to Virginians that Republican leadership is the way forward.