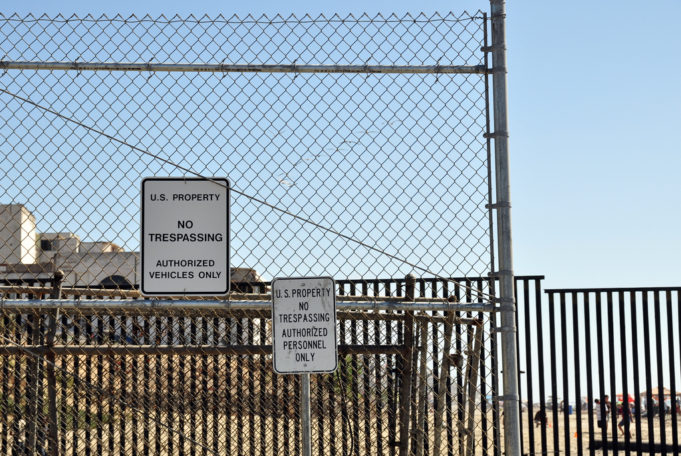 In 1994, the Clinton Administration proposed the “Border Patrol Strategic Plan,” which outlined illegal entry corridors across the southern and northern borders, and bolstered border security teamed with “a pathway to citizenship” for undocumented immigrants. The precursor to the current border patrol force, the Immigration and Naturalization Service (INS), was tasked with upholding a “well-managed border…[to] enhance national security and safeguard our immigration heritage.”

In the years since, with President Donald Trump sitting in the Oval Office, Democrats in the House and Senate have gone away from governing on strong border security to running on creating more open borders, which has led to the common “soft on crime” designation given to those on the left. That is what it looks like now, but it was much different with the liberal caucus just five years ago under the Obama Administration.

In 2013, Senators Tim Kaine (D-VA) and Mark Warner (D-VA) supported the installation of a barrier on the southern border to curb illegal crossings. In truth, all 54 Senate Democrats voted to pass the legislation introduced by Senator Chuck Schumer (D-NY), the Border Security, Economic Opportunity, and Immigration Modernization Act. The Democratic minority was also able to get the “Gang of Eight” and six other Republicans to support the bill that led to passing the measure, sending it to the House where it was left in the 113th Congress.

If passed by Congress, the bill would have added up to 40,000 border patrol agents to Immigration and Customs Enforcement (ICE), and placed restrictions on the H1B visa program (referred to as the “cheap labor” program by critics) to prevent its abuse and expansion of letting student in the country that were pursuing the STEM (science, technology, engineering, and mathematics) fields from U.S. college and universities. It also repealed the Diversity Visa Lottery in favor of prospective legal immigrants who were already in the U.S., making it possible for them to gain legal status and eventually citizenship.

Among other stipulations, the bill would have invested $46 million in border security improvements. Most notably, 700 miles of fencing would have been installed around the areas with most crossings.

Just two days before a partial government shutdown begins after federal funding runs out at midnight on Friday, December 21, President Trump, who says that “illegal immigration costs the United States…billion[s] a year,” is demanding $5 billion for his campaign promise of a wall along the U.S.-Mexico Border. Democrats, on the other hand, are only proposing to allocate $1.6 billion in border security funding, claiming that it would be earmarked only for building new or repairing existing fences.

Trump gave a response to the anemic funding proposal on Twitter, reprimanding the opposition party by saying, “The Democrats and President Obama gave Iran 150 Billion Dollars and got nothing, but they can’t give 5 Billion Dollars for National Security and a Wall?”

Senator Kaine, who said President Trump “was fact-checked to his face” during a meeting with Schumer and House Minority Leader Nancy Pelosi (CA-12) in the White House earlier this week, said on Twitter that the situation “is a silly sideshow from President Shutdown.”

Warner, who has flip-flopped on issues in the past like gun control, has reiterated that he would possibly support “enhanced border security,” but has asked Trump to “get a check from the Mexican government” for the border wall.

Amid a similar government shutdown at the beginning of the year over inaction on the Deferred Action for Childhood Arrivals (DACA) Act, another $1.6 billion offer given to President Trump for a “down payment” on the border wall was reported to have been revoked by Schumer. However, there never was an offer – the New York senator used “authorization” versus “appropriation” legislative jargon to ensure an argument over funding a border wall, which the Senate minority leader and his caucus absolute opposes.

The money is there for the border wall. In fact, the U.S. pledged $5.8 billion in aid and investment for strengthening government and economic development in Central America, and another $4.8 billion in aid for southern Mexico.

The issue hear is “The Resistance” against the Trump Administration. Democrats, not just Kaine and Warner, once favored as much as 700 miles of new border fencing just five years ago. Now, however, the very utterance of words that are synonyms of “wall” are considered blasphemy in the eyes of liberals.