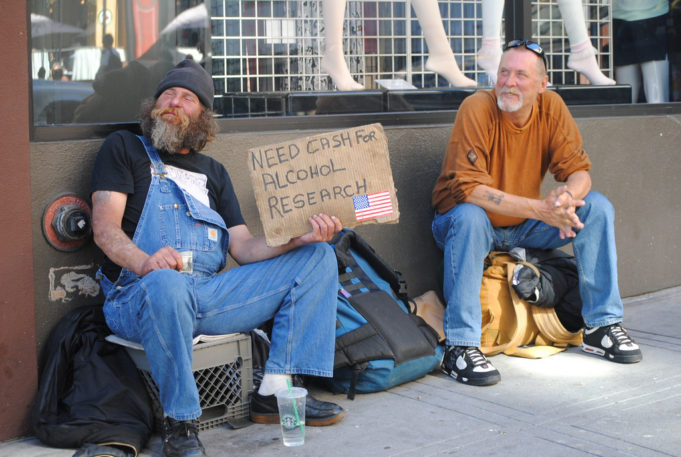 In Virginia, members of the public, if they have consistent and numerous run-ins with law enforcement due to alcohol consumption, can be deemed by the court system a “habitual drunkard,” per a law from the 1930s. The designation means that if one is caught inebriated, consuming, possessing, and even sometimes near alcohol, one can land themselves in jail for violation of their status. Only Virginia and Utah have these so-called “interdiction laws.”

There have been calls to challenge the validity and constitutionality of the law, with advocates against the seemingly “archaic” part of the Virginia Code claiming that it unfairly targets the homeless, who have “no choice” but to drink in public. Last week, however, a federal appeals court in Richmond rejected a challenge to the law, releasing an official opinion explaining that the Commonwealth has a “legitimate interest” in discouraging alcohol abuse.

Although the decision was unanimous by the three-judge panel of the 4th U.S. Circuit Court of Appeals, one judge was highly critical of the law, saying it “criminalizes the otherwise legal behavior of individuals suffering from a serious illness,” according to a report from AP.

The challenge to the law was brought forth by the Legal Aid Justice Center, which argued that it violates the 8th Amendment, which provides a prohibition to cruel and unusual punishment. They said the law “criminalizes addiction, punishes homeless alcoholics who have nowhere else to drink but in public.”

Nevertheless, the court determined the habitual drunkard law “does not single out homeless alcoholics for different treatment.”

Under the 90-year-old law, one deemed a habitual drunkard could find themselves in jail for one year and face fines of up to $2,500 after violation.

“We emphasize what we hope would be obvious: it would be unlawful for the state to simply round up ‘undesirable’ persons based on their perceived status as addicts or drunkards…It is inimical to personal liberty to bring criminal charges on the basis of who someone is,” Judge J. Harvie Wilkinson III wrote in his opinion.

Wilkinson added that the law also applies to people convicted of driving under the influence of alcohol and people under the legal drinking age of 21. He added that “Virginia has been…careful to observe that line,” between enforcement as an interest of the state and the unfair targeting of vulnerable citizens. “It has prohibited individuals deemed at a higher risk of alcohol abuse from possessing or consuming alcohol,” Wilkinson said, which provides for a safer public at-large.

Judge Diana Gribbon Motz said that although she voted with the other judges to uphold the law using binding court precedent, she did so “with reluctance and regret.”

Motz said the law “targets a group of vulnerable, sick people for special punishment based on otherwise legal behavior (drinking alcohol) that is an involuntary manifestation of their illness.”

A few months ago, The Roanoke Times did an exposé on one of the stories stemming from the effects of the habitual drunkard law when a challenge in the court system was arising.

Richard Walls, 48, as been locked up over 30 times since being given the habitual drunkard designation in 2012. He claimed his father was an alcoholic who was prosecuted under the same law set to prohibit individuals from possessing alcohol, and set him on the same path at a young age, when his father would often put moonshine in his baby bottle.

As stated in the report, from 2007 to 2015, more than 1,220 people were designated as habitual drunkards in Virginia, according to data reported to the Virginia Department of Alcoholic Beverage Control.

“This criminalizes the status of being a homeless alcoholic,” said Mary Frances Charlton, the lead attorney who challenged the law in front of the 4th Circuit Court. She says the law violates due-process rights because the cases are brought in civil court and the defendants are not guaranteed a lawyer as they are in criminal cases.

Around the Commonwealth, the law is enforced different on the public. In Virginia Beach, a coastal city that relies heavily on an economic boost from millions of tourists, the law is aggressively enforced. In the eight-year period in which over 1,220 Virginians were designated as habitual drunkards, 616 were in Virginia Beach, far more than any other municipality.

“They’ve essentially been ordered by the court to stay away from alcohol. It’s trying to dry them out and get them back to some sort of normalcy in their life,” Virginia Beach police Lt. Johnny Gandy said.

“Our officers would much rather do other things than this,” he said. “We hate seeing people destroy their own lives.”

Assistant Commonwealth’s Attorney John McNeil explained: “Generally, there has to be something they do that brings them to the attention of law enforcement. It’s often citizens complaining that the person has passed out or is doing something else.”

Although the court upheld the law and ensured that it meets constitutional requirements, there seems to be a lack of rehabilitation programs for those with the designation. When it comes to nationwide criminal justice reform, it is not so much that laws unfairly target vulnerable individuals, but that the necessary rehabilitation programs do not exist that will help people adhere to laws on the books.