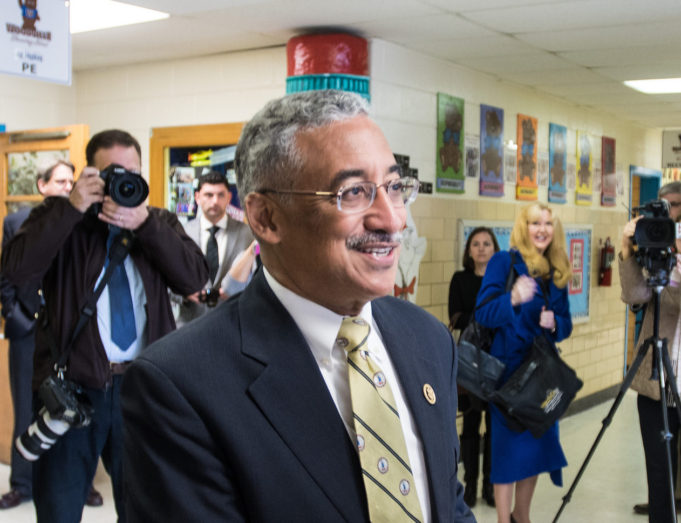 Democratic Congressman Bobby Scott (VA-3) was made aware in late 2017 of the sexual assault allegation that has roiled Virginia Lieutenant Governor Justin Fairfax (D), according to many reports. As the crisis in the Commonwealth deepens, Fairfax’s accuser, Dr. Vanessa Tyson, a professor at Scripps College in California, gave a very graphic description of the sexual assault she alleges occurred at the 2004 Boston Democratic National Convention.

In her statement published by the New York Times, Dr. Tyson said she came forward after the news of Fairfax’s likely elevation to the top political position in Virginia, because it “flooded” her with “painful memories, bringing back feelings of grief, shame, and anger that stemmed from an incident with Mr. Fairfax.”

“What began as consensual kissing quickly turned into a sexual assault,” she said.

“Mr. Fairfax put his hand behind my neck and forcefully pushed my head towards his crotch. Only then did I realize that he had unbuckled his belt, unzipped his pants, and taken out his penis. He then forced his penis into my mouth. Utterly shocked and terrified, I tried to move my head away, but could not because his hand was holding down my neck and he was much stronger than me. As I cried and gagged, Mr. Fairfax forced me to perform oral sex on him. I cannot believe, given my obvious distress, that Mr. Fairfax thought this forced sexual act was consensual. To be very clear, I did not want to engage in oral sex with Mr. Fairfax and I never gave any form of consent. Quite the opposite. I consciously avoided Mr. Fairfax for the remainder of the Convention and I never spoke to him again.”

When news of the allegations surfaced last week, Fairfax, in a tweeted statement, called the accusations “false and unsubstantiated” and a “totally fabricated story.”

In the height of the “#MeToo” movement, although he reiterated “how important it is for us to listen to women,” an NBC News reporter caught Fairfax saying “f*** that b****” as he tried to discredit Dr. Tyson during a private meeting Monday night.

“Mr. Fairfax has tried to brand me as a liar to a national audience, in service to his political ambitions, and has threatened litigation. Given his false assertions, I’m compelled to make clear what happened,” Dr. Tyson added in her statement.

Nevertheless, Fox News and other outlets report that Congressman Scott was made aware of the allegation in December 2017 and January 2018. Scott and Dr. Tyson are also said to have been friends “for years,” and that she first met with the Virginia representative when The Washington Post was first looking into her allegations right around the time Fairfax was elected Lieutenant Governor in the 2017 statewide elections.

Interestingly, Scott was also accused of sexual harassment in 2017 by a former congressional aide, who claimed she was fired and blackballed from work on Capitol Hill when she refused his advances.

As the accusation against Fairfax plays out, the rest of Virginia’s Democrat-led executive branch remains engulfed in racial controversy.

Last Friday, photos surfaced of Governor Ralph Northam (D) reportedly appearing in his 1984 Eastern Virginia Medical School (EVMS) yearbook either in blackface or in KKK robes. He first confirmed that he was in the photo – not saying which one – then backpedaled the day following at a very odd press conference, which included an attempt to “moonwalk” in front of reporters and his wife, Pam, telling him “inappropriate circumstances.”

This Wednesday, Attorney General Mark Herring (D) admitted to wearing blackface to look like a black rapper at a party at the University of Virginia in Charlottesville in 1980. His admission came after he previously called for Northam’s resignation for also appearing in racist photos.

Fairfax, who would become Virginia’s governor if, rather when, Northam resigns, suggested that supporters of the embattled governor leaked the sexual assault accusations in a stunning display of deep fractures developing within Virginia’s Democratic Party following this weekend’s press conference in the crowded Capitol rotunda.

Now that Congressman Scott, Virginia’s senior Democrat in the U.S. House of Representatives, is named as one who knew about the incident when it surfaced, one must ask: Who else knew and did nothing?