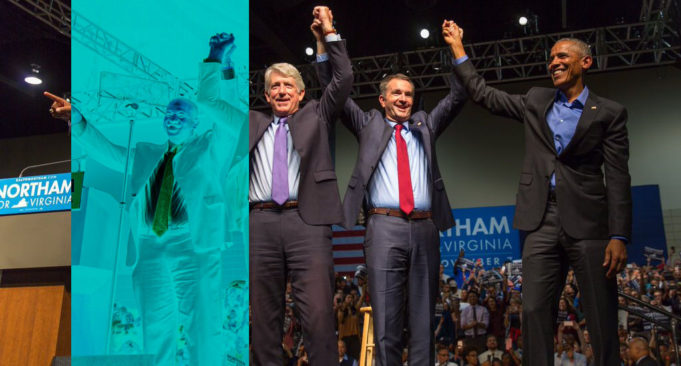 Whether one falls on the side of justice or on the side of the accusers is one matter altogether, but there’s no question that the political left sees a high degree of utility vis a vis Lieutenant Governor Justin Fairfax being hauled up in front of the Virginia General Assembly to answer allegations of sexual misconduct.

…that is, what might be good for Fairfax could also be good for Trump.  Or Kavanaugh.  Or any other Republican accused of sexual misconduct.  From the Washington Post:

There are two main procedural ways forward. One is the prospect of criminal investigations in Durham, N.C., where Mr. Fairfax is alleged to have raped an acquaintance at Duke University, in 2000, and Boston, where another woman says he forced her to perform oral sex on him, against her will, in 2004. Mr. Fairfax says both encounters were consensual.

The other is for the House of Delegates in Richmond to undertake an impeachment hearing, with witnesses who would testify under oath. If the House recommended that Mr. Fairfax be removed, it would fall to the state Senate to decide his fate; he could be removed on a two-thirds vote.

Of course, those silly Republicans should be absolutely enthralled at the opportunity to whack Fairfax, arguably the most progressive member of the Virginia statewide officeholders and potential challenger to the preferred Democratic establishment pick of Attorney General Mark Herring:

Among the problems with legislative inquiry is the possibility or likelihood that it devolves into political theater, or farce. Another is that whatever investigative authority the House may wield may not be adequate to compel testimony from some potentially relevant witnesses. Democrats, some of whom have called for Mr. Fairfax to resign, have opposed such a hearing, though it may hold just as much political peril for Republicans.

Gee — wonder why it might pose political peril for Republicans?

If one has a finely attuned political antennae, one can instantly see the play.  If Republicans are eager to haul Fairfax up to impeachment hearings on allegations (not convictions) of sexual misconduct, it normalizes all sorts of Democratic talking points concerning U.S. Supreme Court Justice Brett Kavanaugh.  Or President Donald Trump.

But that’s the national play.  The statewide play?  Housecleaning in preparation for 2021 and taking voters eyes off the Northam/Herring blackface scandal by making the other guy worse than a racist.

…which is all the more reason why the WaPo openly bemoans the fact by asking why no one will rid the political left of this meddlesome lieutenant governor?

Nonetheless, a hearing remains the sole option that may be exercised at the General Assembly’s discretion, and the only way to elicit sworn testimony by Mr. Fairfax and his accusers, among others, in a public forum not susceptible to stage managing by any of them. Whatever its imperfections, it is the most likely means to deliver an accounting to what is, at this point, the real jury: the people of Virginia.

Certainly the Democrats cannot be seen to put Fairfax’s blood on their hands.  Why not allow the Republicans — who by media narrative, are struggling beyond hope to hold on to the Virginia General Assembly (not true) — to pose as those mythical “honorable conservatives” in their lame duck session and do the deed for the Democrats… all in the interest of fairness and due process (of course).

Nonetheless, in America we have due process.  Fairfax is certainly no different than any other accused person in this regard, and until a court of law evaluates evidence and weighs the scales in such a way as to leave no doubt of Fairfax’s guilt?  In good conscience there can be no impeachment hearings, no witch hunt, and no kangaroo court.

Of course, this has nothing really to do with justice.  Much like Kavanaugh’s accusers, there exists a certain coterie of operators who will abuse the suffering of others in order to advance a political motive.  One doubts sincerely that the WaPo editorial board cares one whit about the alleged victims, much less Fairfax’s Democratic opposition who worked feverishly to keep him off the ballot.

Fairfax is by no means a man of the right, to be sure.  One’s defense of Fairfax isn’t so much that of like political minds insofar as it is of like political circumstance.  We defend due process not for its own sake, but precisely because one day we might find ourselves in similar circumstance and demand every iota of justice to be brought to bear on our own account and in the presumption of innocence.

For as often as Democrats wish to deny this legacy, to outsiders it sure appears as if Justin Fairfax is another in a long line of political victims that speak to what Democrats believe at core — not justice, but power for its own sake.