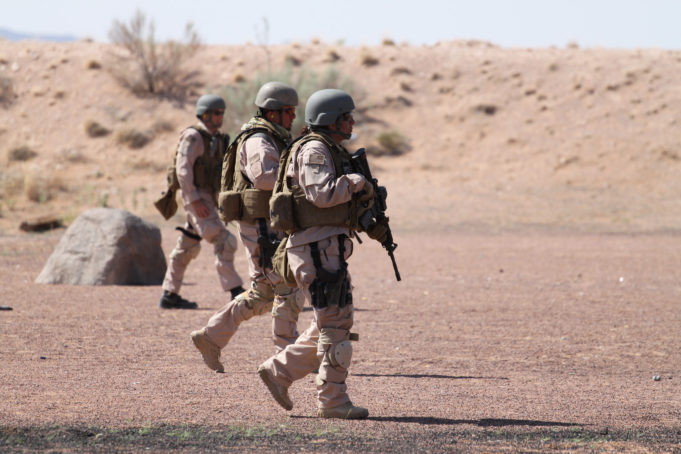 Following one of the largest migrant caravans in recent memory arriving at the U.S. border with Mexico – with what is left of the instance being thousands of Central Americans occupying a makeshift camp at baseball field a few hundred feet from the border – the U.S. will begin active duty troop withdrawal from the southern border. Although it has yet to be approved by Secretary of Defense Jim Mattis, the proposal from the Department of Homeland Security (DHS) would decrease deployment numbers from 5,600 to 4,000, with the extension of the remaining personnel expiring in January.

As the thousands-strong migrant caravan edged closer towards the U.S.-Mexico border, the Pentagon announced in October that it would deploy at least 5,200 active duty military troops in an effort to prevent foreigners from illegally entering the country. Earlier this year, 2,100 National Guard troops from multiple states were called to protect the border following an order from President Donald Trump when a former caravan attempted to gain entry.

Months ago, after a politically-charged debate over immigration enforcement at the southern border, Virginia Governor Ralph Northam (D) ordered the state’s National Guard troops back home, reportedly until Trump ended “his” family separation policy. Virginia Attorney General Mark Herring and 20 other attorneys general signed a joint letter calling for the end to the family separation policy.

According to a report from AP, the troops staying at the border would include combat engineers who install and repair the “concertina wire barriers,” helicopter crews to provide transportation, military police to protect U.S. forces and border patrol, and other service members to provide ongoing food, shelter, and other support for the troops. Nevertheless, as entries into the country increase in states with a more liberal-leaning sentiment towards immigration, more troops are expected to shift from Texas and Arizona to California.

As of Friday, 2,400 troops were deployed in Texas, 1,800 in California, and 1,400 in Arizona. As of last week, the cost of using troops to help secure the border was estimated at $210 million. The two-month extension is likely to contribute an increase in federal expenditures.

California Attorney General Xavier Becerra has motioned recently to challenge the Trump Administration’s immigration policy and handling of border crossings after this weekend’s “use of force” against a caravan of migrants as the possible closure of the southern border looms with lawsuits against pending.

Border patrol agents launched tear gas into crowds of hundreds of aggressive migrants on Sunday at the San Ysidro border crossing near Tijuana. After being promised by caravan organizer Pueblo sin Fronteras that the asylum process would be “easy,” frustration has grow per the slow pace of the application processing. This has caused some groups to rush the border, while approximately 6,000 migrants remain camped in temporary shelters awaiting asylum.