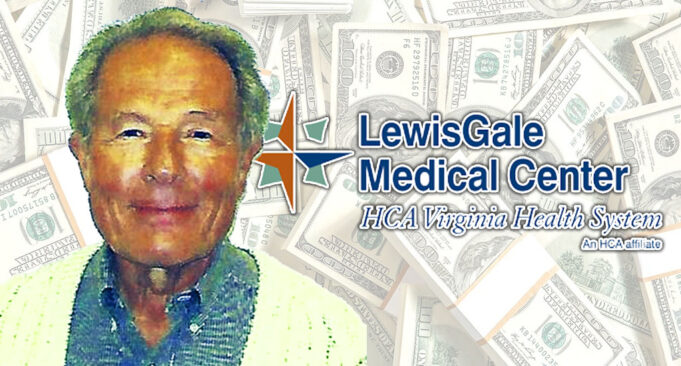 As the retired CEO of the Lewis-Gale Medical Center, you’d think that Karl Miller might know a thing or two about political contributions.

So it is without irony that Miller writes this op-ed in the Roanoke Times bemoaning the presence of lobbying dollars from businesses under the oversight of the Virginia Corporation Commission — a practice Miller indulged in for decades:

Our State Corporation Commission has served its constituency well in denying APCO’s rate increase. But, perhaps Virginians can begin changing the priorities of company’s like APCO from the stockholders to their customers by petitioning the forthcoming 2021 Legislative Session to ban ALL political contributions to elected officials. These political “bribes” (otherwise called “political contributions”) put our elected officials into a compromised position of either supporting their financial backers like APCO or supporting the people of Virginia who elected them to office. APCO’s request for an unconsciable rate increase should be a call to action for all Virginia in 2021.

Naturally, I don’t have much of a dog in the fight over Appalachian Power Company’s request for a $10/mo increase.  Whether or not it is a reasonable request is entirely the purview of the State Corporation Commission.

Clearly, the SCC doesn’t get bribed.  In fact, the mere insinuation that the SCC is somehow influenced third-hand by politicians who tell bureaucrats who tell SCC members how to perform their duties doesn’t exactly put Miller in the best of lights — if this is indeed what is happening (and we suspect that it is not).

Rather, we suspect Miller is exhibiting symptoms of a different disease, that being philanthropy on the taxpayer dime.

Unlike private firms who routinely fork over 12-15% profit margins (or more) to shareholders on Wall Street, firms that are governed by the SCC are prohibited from generating profits beyond 8%.  The tradeoff — if you are an investor — is the the distinction between very good returns on your investments and steady, reliable returns on your investments — whether the firm is a utility or the health care industry.

Of course, if you want to see what HCA spends in Richmond, look no further than the $2.7 million in “political bribes” spent since 2005.

Meanwhile, APCO has doled out $4.3 million during the same time period, with both parties (predictably) taking a bath in the lobbying dollars.

Miller — having lathered up in the game of political contributions — perhaps is turning a new leaf and insisting that this game (from which he both participated in and profited) is too dirty to continue.

Yet it is hard to argue remorse with argumentation such as… well, this:

APCO’s leadership has no shame; they have no morale (sic) compass; and they have no compassion for all residents who will be forced to reduce their food expense to fund this greedy, immoral, and reprehensible Company that pretends to “serve” Virginia residents.

That the Roanoke Times missed the difference between a moral compass and a morale compass — which, one supposes, is what lobbying dollars help boost — suggests that this op-ed was published quickly as a favor, rather than with any real introspective intent.

Which begs the question.  Does Miller by his own indictment “have no shame”?  Does Miller lack a moral compass when he decries the same practice he indulged in for decades?  How many families had to reduce their food expenses to pay for medical bills as Miller continued to “fund this greedy, immoral, and reprehensible Company that pretends to “serve” Virginia residents?”

Of course, this is all pure hyperbole.

HCA does good work given the hands they are dealt, and certainly during the pandemic.  Appalachian Power, long the target of environmentalist thugs, is doing the best they can with the tools at their disposal.

Many of the SCC-regulated firms are specifically governed and regulated in order to ensure that there is a balance between profit and service — and in most cases, civic institutions that put back into their own communities.

Miller engages in a cheap shot for the purposes of political philanthropy.  Which is what one might expect from a guilty conscience long accustomed to “political bribery” in Richmond and elsewhere.  But let’s not kid ourselves for a moment that the concern is sincere, or even with an eye towards atoning for past sins — merely opportunistic.