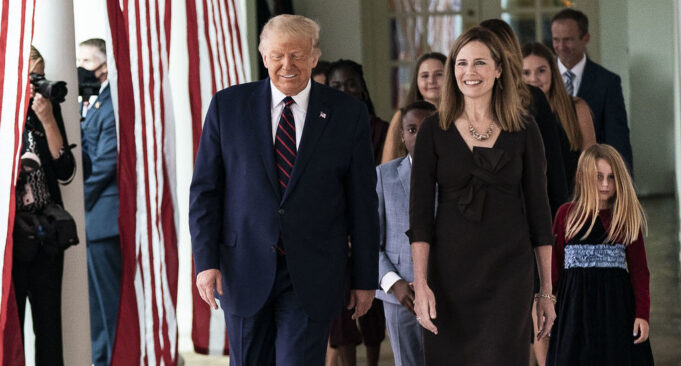 Have the Democrats made a catastrophic error in attacking Barrett’s charismatic Catholicism?  Hispanic voters may have the last say.

For astute readers reading the tea leaves of the 2020 presidential campaign, there are any number of parallels to 2016 — where Trump shocked the nation (but not everyone) with an improbable win over Democratic nominee Hillary Clinton among “Reagan Democrats” in the Rust Belt.

With President Trump firmly in the drivers’ seat and the Republican National Convention a faint memory, there were three distinct audiences Trump expressly solicited: black voters, military voters, and above all others?  Catholic voters and especially Hispanic Catholics who know better.

Democrats have long made the assumption that Hispanics would be in lock step with progressive orthodoxy, yet much of that changed during the summer as Antifa began burning areas in places where Hispanics have long done and owned businesses.

There remains another tricky question, namely a Democratic assumption that all Hispanics would be in favor of illegal immigration by virtue of the fact they were Hispanic — which ironically enough, raises suspicions about racism among progressive pollsters and politicos.

Yet it is Democratic pressure groups who lashed out against Barrett’s charismatic Catholicism that seems like the strangest shot, not just because it is a religious test but more notably for the reason that this variant of Catholicism is popular (in fact, rather common) among Hispanic Catholics.

Amy Coney Barrett represents any number of qualifications that make Catholics quite proud.  As a true successor to the late Justice Antonin Scalia, Barrett makes no bones about her working class upbringing.  Graduating from Notre Dame, Barrett is one of the first justices to come to the court coming through Catholic institutions and not the Ivy League.

Yet more than this, Barrett represents a Catholic background.  Barrett comes from a family of many children; Barrett has many children herself.  Barrett’s devotion to both her faith and her values has earned the support of fellow Catholics by wide margins, with even 24% of Catholic Democrats endorsing her rise and one in three Hispanic Catholics supporting Barrett’s election.

That number right there — one in three — is the number that scares Democrats.  Already, the shift in the polls is noticeable in states one might consider (Arizona, Florida, Colorado) but also in states one might not readily think: Georgia, North Carolina and Virginia:

Hispanic voters will play a significant role in Senate elections in states like Arizona and Colorado, with relatively large Hispanic populations, but could also move the needle in places with smaller Latino populations and close races, like North Carolina and Georgia.

Barrett, a conservative Catholic, could appeal to Latino voters who skew toward the right on social issues.

Moreover, the attacks on Barrett’s faith haven’t shed much support for her among Catholics, particularly in the Hispanic community.

In fact, her particular brand of charismatic Catholicism is popular particularly among Hispanic communities who feel that the Democratic attacks on her faith are directed not just at her — but them.

Going after Barrett’s charismatic faith will do nothing to block her progress through the Senate. It will not add to anti-Trump enthusiasm among the Democratic base, which has long since reached max capacity. But it could well alienate key voting blocs who don’t find charismatic Christianity as weird and scary as many white progressives evidently do. I’m particularly thinking of Hispanic voters who are recent immigrants, children of immigrants, or otherwise maintain close ties to extended family in the Global South, because there is a strong chance those family members or these voters themselves are charismatic Christians, too.

Have the Democrats made a catastrophic error in attacking Barrett’s charismatic Catholicism?  Hispanic voters may have the last say.