It’s not easy to get a Pants on Fire rating from PolitiFact — especially if you’re a Democrat.

But Sheila Bynum-Coleman, the darling of the left running against Republican House Speaker Kirk Cox did just that with her first TV ad of the cycle.

Bynum-Coleman and her team were apparently trying to take advantage of an issue that both Democrats and Republicans say is important to voters this year — raising teacher pay.

Republicans included a 5 percent raise for teachers in the budget which was passed into law. Predictably, both parties have been crowing about how they took care of teachers.

But as a challenger, Bynum-Coleman couldn’t use that message. The next best thing? Turn it against her opponent. That meant trying to paint Speaker Cox as an opponent of teacher raises.

That’s where Bynum-Coleman’s team made their first mistake — the corner of due diligence and reality. Cox, a retired teacher, has voted for every teacher raise that was put in front of him.

The corrected version attacked the correct Cox, but was utterly wrong on its facts. That’s when PolitiFact, no friend to Republicans in most cases, came on the scene. They found Bynum-Coleman’s ad to be lacking.

“Overall, Cox unfailingly voted each year for incremental versions of the state budget that were passed by the Appropriations Committee, the House, and the full General Assembly. Don’t forget that he had an influential role at each step,” wrote Warren Fiske, the PolitiFact editor for Virginia.

It just got worse from there. Bynum-Coleman said the Speaker joined “special interests” to block pay raise.

“Our legislative memory, dating to 1986, doesn’t recall any organized lobby against teacher raises,” Fiske wrote. “The economy has been the driving force: In good times, teachers usually get raises; in tight times, they don’t.”

“We asked [Byum Coleman campaign manager Rob] Silverstein to identify the special interests. He said he was driving and would get back with an answer. We’re still waiting.”

As of this writing, Bynum-Coleman has yet to take down the ad, and has in fact doubled down: mailers to the 66th House District from the candidate repeat the same claims, with dubious citation. 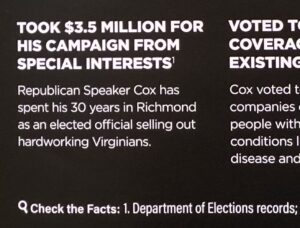 Her claim about “special interests” is simply footnoted to “Department of Elections Records,” or VPAP.org — the nonprofit repository of all things campaign finance related in Virginia. Not to a page on Speaker Cox, mind you, just the whole site.

Unless they’re intentionally lying, and hoping someone doesn’t notice.

Unfortunately for them, everyone noticed.