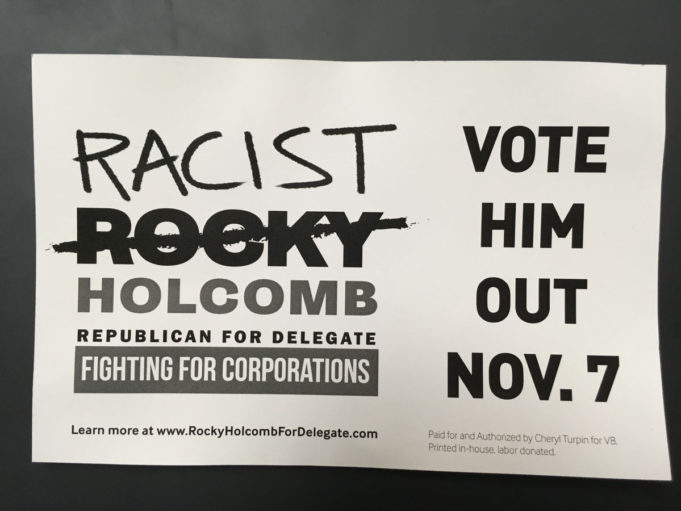 Do as she says, not as she does.

Even the most cynical of political observers would gasp at the gall of new Democrat Delegate Cheryl Turpin, whose campaign was one of the ugliest seen in recent history.

Turpin, who despite having a relatively small workload of bills patroned is still able to see them killed with relative ease, decided she needed to file legislation against hate crimes.

Apparently, she doesn’t think flyers calling someone a “racist” counts as hate.  What is it?  Extreme dislike?

I wouldn’t call Turpin, who won through lying and untrue character attacks, the best legislator to lead the fight against hate crimes unless the goal is not defeating hate but supporting hypocrisy.

Turpin’s campaign plastered flyers in two precincts in an attempt to destroy Rocky Holcomb’s reputation with a baseless slur, and she suddenly thinks hate crimes are a bad thing?

I’m surprised no Democrat in the House of Delegates hasn’t stood up and denounced how she won her slim victory and advised her that calling people racists is pretty hateful.

But the fact that she is so tone deaf that she can lead a hate-filled campaign and then fancy herself as the champion against hate is beyond belief.