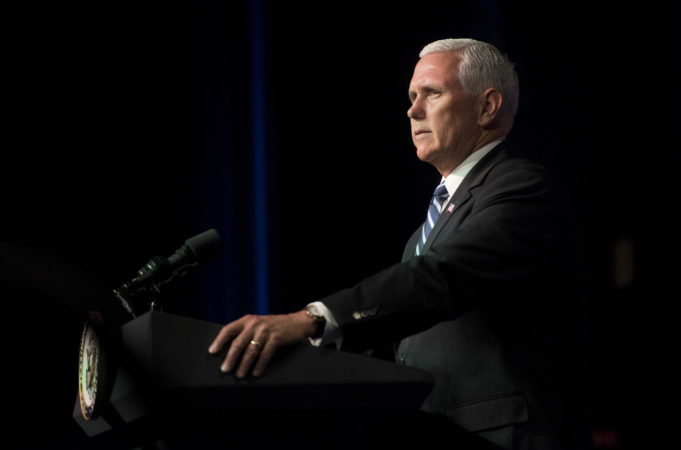 After facing a round of protests from some of the students, Former Vice-President Mike Pence spoke at an event at the University of Virginia to a sold out crowd of roughly 850 people.

The event was hosted by the Young America’s Foundation at UVA and allowed Pence the chance to speak about the ‘woke left.’ Prior to his speech, the school’s newspaper, the Cavalier Daily, caused controversy by trying to have the event cancelled, calling Pence’s views on LGBTQ individuals and their rights, immigrants and minorities as dangerous rhetoric that “is not entitled” a platform. (RELATED: Mike Pence to Speak at the University of Virginia Causes Uproar)

“The exchange of ideas about Mr. Pence’s presence on grounds is not a sign that free expression is dead on grounds. It’s a sign that it is alive and well.”

Pence used his time Tuesday night to extol the importance of free speech, to encourage young people to get involved in politics and public service, and to promote a set of traditional conservative values that have characterized his political career.

“Let me also profess my profound gratitude for President Ryan and 17 faculty members who stepped up in defense of freedom.”

Pence also frequently invoked Thomas Jefferson – quoting him several times and including a reference to Wednesday as the celebration of Jefferson’s birthday, known on Grounds as Founder’s Day – and said UVA students have a connection to the origin of American democracy that few other university students enjoy.

This is not the first time that the first time the newspaper has gone after Pence. The University of Virginia’s student newspaper received plenty of criticism after its editorial board wrote that they couldn’t “condone” former Vice President Mike Pence’s visit to the Charlottesville campus. The Piece was widely criticized for attempting to silence free speech, and conservative’s voices. (RELATED: UVA Student Newspaper Ridiculed for Wanting Mike Pence Cancelled)

A SENIOR LEGAL AFFAIRS REPORTER FOR POLITICO, JOSH GERSTEIN, USED A HASHTAG TO SAY STUDENT NEWSPAPERS FORCE CENSORSHIP. THE PIECE WAS FIRST NOTED BY ATLANTIC STAFF WRITER CONOR FRIEDERSDORF, WHO SAID PENCE HAS SPOKEN AT SEVERAL COLLEGES AND SAID THERE WAS “ZERO EVIDENCE” OF STUDENTS “BEING ENDANGERED AS A RESULT.”

A REPUBLICAN POLLSTER, PATRICK RUFFINI, SAID IT WAS “IDIOTIC AND ILLIBERAL.” MARY KATHARINE HAM, A CNN CONTRIBUTOR AND SENIOR WRITER AT THE FEDERALIST, ALSO TOOK AIM AT THE EDITORIAL BOARD’S CLAIMS OF VIOLENCE.

“IT DOES NOT THREATEN ANY LIVES,” SHE WROTE ON TWITTER. OTHERS TOOK ISSUE WITH THE EDITORIAL BOARD’S ARGUMENT AGAINST WHAT THEY DESCRIBE AS “UNJUSTIFIABLE” SPEECH.