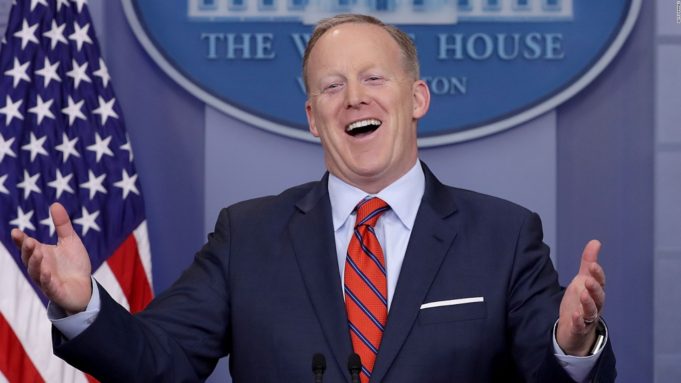 CNN (photo credit) put the word out first that Sean Spicer might be folding it in, and The New York Times gets the scoop: Sean Spicer is moving on from the White House.

Mr. Trump offered Mr. Scaramucci the job at 10 a.m. The president requested that Mr. Spicer stay on, but Mr. Spicer told Mr. Trump that he believed the appointment was a major mistake, according to a person with direct knowledge of the exchange.

Anthony Scaramucci was attached to the Trump transition team and is a noted financier, recently selling his business SkyBridge for an estimated $200mil to Chinese conglomerate HNA Capital.

Scaramucci also has noted connections to Kirill Dmitriev, the head of the $10 billion Russian Direct Investment Fund, a sovereign wealth fund with noted investments in Saudi Arabia and elsewhere.  Scaramucci is on record as stating that the sanctions against Russia have produced the opposite effect that the Obama administration has intended, citing national pride as a motivating factor placed well beyond economic conveniences.

CNN has already put the crosshairs on Scaramucci as early as January 2017 for his Russian contacts, at one point even suggesting the U.S. Senate was ready to investigate possible links.  Just last month, CNN retracted that article in a brief two-paragraph renunciation.

Observers might wonder why a man worth hundreds of millions of dollars and a deep understanding of Russian foreign affairs would serve as press secretary (rather than say, serve at the State Department).

Sometimes patriotism takes over and you do what the President of the United States asks.  Other times, you want someone with a deep knowledge of a core competency — and if the Trump administration is serious about forging a friendship (or at least a common understanding) between the United States and the Russian Federation?  One would want those with a deep understanding of such issues speaking before reporters.

Yet one probably shouldn’t read too deeply into Scaramucci’s rise and Spicer’s exit.  Most White House press secretaries don’t last more than 6-12 months.  It is a 24 hours a day, seven days a week job… and the mainstream media hasn’t exactly made it easy for Spicer or anyone else in the White House to get the president’s message out.

In the meantime, a well earned vacation is deserved.

Sean Spicer is one of the good guys who perhaps was genuinely liked by the media personally even if the White House press corps was maddeningly frustrated with the hand that had been dealt to all sides.  Spicer will no doubt do very well, being one of the few outsiders who can navigate the seas of a Trump administration difficult for others to decipher.