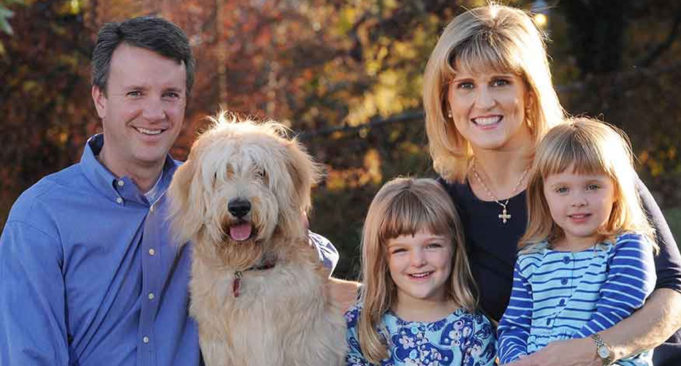 After a wild rodeo of a convention in Virginia’s Sixth Congressional District last month, Delegate Ben Cline (R-Rockbridge) hit the campaign trail on a old-fashioned walking tour of the district, visiting gun shops, restaurants, and areas where he could meet hopeful voters. A lawyer by trade, he has learned over years of campaigning that there is always a colorful mix of opinions from constituents.

Typically, when Cline stumps at a gun shop in the district, the owners agree with his position on defending the Second Amendment from overreaching government regulations. On Thursday, he visited the Vinton Pawn Shop and spoke with owner John Mullins, who told Cline that he has been selling an increased amount of semi-automatic rifles recently.

“I led a [House] committee that stopped a lot of gun regulation bills,” said Cline. This year, Democrats in the General Assembly introduced over 80 measures that would have stripped away Second Amendment protections, like high-capacity magazine bans and raising the age required for purchase. Cline, who has an A+ rating from the National Rifle Association, was on the frontline with the Republican majority that halted nearly all of the failed bills from Democrats.

Nevertheless, Mullins was less enthusiastic, according to The Roanoke Times. “I don’t think people need those killing guns,” he responded. “Those are for Army people.”

Mullins did not finish by agreeing with Cline on that issue, but he said he appreciated Cline stopping into his store to ask about his concerns.

At the Dogwood Restaurant, while eating a Hawaiian chicken sandwich, Cline listened to the concerns of part-owner and general manager James McCarthy about burdensome taxes and how people can be better able to afford quality healthcare. Cline said small business regulations and healthcare reforms are two issues he has heard from people the most often while walking the district.

Three weeks ago, Cline launched his walking tour in Amherst County, where he said he put 50 miles on the soles of his shoes. “It’s old-age campaigning meets new-age campaigning,” Cline said, which will be teamed with elements of social media for people to follow his journey to Congress.

Cline met with Chief Tom Foster at the Vinton Police Department where they discussed the opioid crisis and the resources needed to combat it. The nationwide epidemic has hit rural Virginia particularly hard.

The Rockbridge delegate recorded a video while he was there explaining the local police department’s early success with its “drug take-back box,” an apparatus targeted to get people to dispose of unused prescription medications so they do not end up being abused.

Although immigration is a hot-button issue, Cline said the people he talked to did not mention it. Though, he did explain that President Donald Trump, concerning family separations at the border, “did the right thing by addressing the situation,” by issuing an executive order.

Cline also said that the U.S. must maintain strong borders and it should build the border wall and end chain migration. He called for comprehensive immigration reform.

In the district that stretches from Lynchburg in the south, to Front Royal in the north, he’ll be competing against Democrat Jennifer Lewis, a mental health professional from Augusta County, for the seat being vacated by retiring Congressman Bob Goodlatte, for whom Cline once served as an aide.