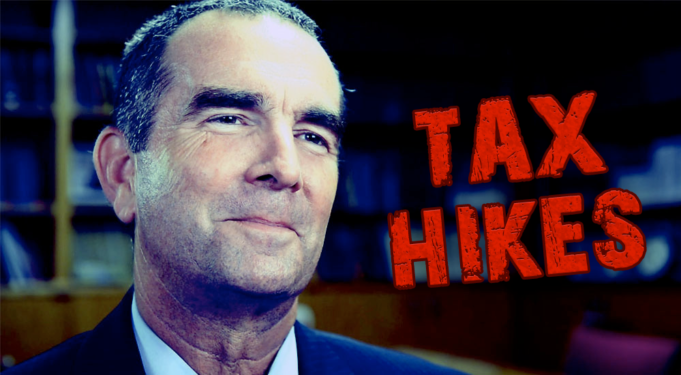 Northam’s budget proposal, unveiled before lawmakers in Richmond on Tuesday, would increase government spending by $2.2 billion dollars, including $1.6 billion in recurring spending commitments occurring after his term as governor expires.

The recurring spending would commit future governors and lawmakers to long-term expenditures lasting beyond Northam’s term in office, locking in middle class tax hikes for years to come and obstructing efforts to deliver tax relief.

Northam’s budget would deposit $500 million in the reserve, just half of the $1 billion committed by Republican lawmakers six months ago when fighting to reaffirm Virginia’s AAA bond rating.

However, unlike the Republican approach which set those funds aside for a rainy day, Northam’s budget immediately directs over $200 million to be withdrawn for immediate spending.

Republican leaders blasted the move, which many see as a financial shell game being used to overstate deposits to the reserve fund, for political purposes.

“That was never the intention of the revenue reserve,” said Delegate Chris Jones (R-Suffolk), who chairs the House Appropriations Committee which oversees the budget. “That was to build a balance almost like you would in your own budget if you got to replace a roof or you’ve got some kind of catastrophic event where you’ve lost your job.”

“So to say you’re going to put $500 million plus into a revenue reserve and then you’re going to take $210 or $220 million out of it for projects and items that we should be paying for,” Jones continued.

Northam’s long-term spending and plans to draw funds out of the cash reserve raised concerns among Republican lawmakers who noted that many economists are forecasting an economic slowdown in the not too distant future.

Despite several quarters of strong economic growth, Republicans expressed worry that Virginia remains too reliant on federal spending and has done too little to diversify the private sector under the administrations of Northam, as well as his predecessor, Governor Terry McAuliffe.

Republican leaders pledged to fight Northam’s tax hike and deliver an alternative budget proposal, which they said would be “conservative and responsible” while also focused on maintaining Virginia’s AAA bond rating.

Republican leaders said their alternative would keep spending under control and not raise taxes “on the backs of the middle class.”

“I thought it was interesting when [Northam] said that Virginia can keep more of their paycheck,” said Jones. “Well, the $1.2 billion is coming from Virginians who are paying taxes now that are going to be paying higher taxes if we take no action.”

Lawmakers will vote on Northam’s budget proposal as well as the Republican alternative during the 2019 legislative session, which convenes on Wednesday, January 9. Virginia’s biennial budget was previously adopted in 2018.