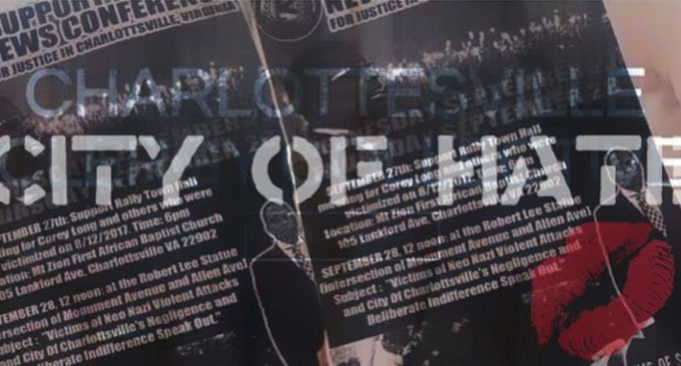 On the heels of Charlottesville’s violent, August 12 White Nationalist rally, a local church is hosting a notorious purveyor of anti-semitic, anti-white rhetoric.

Mt. Zion First African Baptist Church is slated to host a “support rally town hall” for those “who were victimized on 8/12/2017.” The September 27 event will be led by attorney Malik Zulu Shabazz, founder and president of Black Lawyers for Justice.

Scant local attention has been given to the event, specifically Shabazz’s racist statements against “Jews” and “whites.”

The ideologically far-left Southern Poverty Law Center (SPLC) has included Malik Zulu Shabazz in its “Extremist Files,” referring to the attorney as “a racist black nationalist with a long, well-documented history of violently anti-Semitic remarks and accusations about the inherent evil of white people.”

Mr. Shabazz previously was affiliated with Louis Farrakhan’s Nation of Islam, of whom the SPLC says: “Its theology of innate black superiority over whites and the deeply racist, anti-Semitic and anti-gay rhetoric of its leaders have earned the NOI a prominent position in the ranks of organized hate.”

He later helmed the New Black Panther Party, which the SPLC calls “a virulently racist and anti-Semitic organization whose leaders have encouraged violence against whites, Jews and law enforcement officers.”

In a 2016 essay for the Jerusalem Post, revered American civil liberties attorney, Alan Dershowitz, identified Mr. Shabazz as an “advocate for genocide against Jewish ‘babies’ and ‘old ladies’.” Dershowitz was referring to a 2002 Shabazz speech protesting B’nai B’rith International, during which Shabazz stated:

In the same article, Dershowitz criticized political activist Cornel West for his support of Malik Shabazz:

Yet Cornel West, in recently introducing this despicable bigot [Shabazz] at a “March of the Oppressed” rally in Cleveland, praised him as “my dear brother” who he has known for 20 years and who “is still on the battlefield.” He compared this rancid anti-Semite to the great Martin Luther King Jr. He asked the crowd to applaud for Shabazz, which they did. He then hugged him. You can view West’s speech at #MASSIVE rally and March in #CLE #BlackLives- Matter on YouTube.

West’s endorsement of Shabazz is comparable to a white professor introducing the grand wizard of the Ku Klux Klan with such effusive praise. Despite West’s close association with and support for this advocate of genocide against Jewish babies, West was appointed to the Democratic Party Platform Committee by Bernie Sanders. He also remains a founding member of Tikkun magazine’s Network of Spiritual Progressives under the leadership of Rabbi Michael Lerner. For shame!

Coincidentally, Cornel West was present for and participated in Charlottesville’s August 12 events, in conjunction with the Charlottesville Clergy Collective, the “brainchild” of Dr. Alvin Edwards.” Edwards is the former Mayor of Charlottesville and is Pastor of Mt. Zion First African Baptist Church, which will be presenting Shabazz this evening.

In a recent communique, social justice activist group, Solidarity Cville, expressed support for Charlottesville High School “student activists of color” in their condemnation of, among other things, anti-semitism:

We support the call to action from Charlottesville High School student activists of color:

● To build a city where people feel safe
● To not just change policy but also shift culture
● To support youth in addressing white supremacy, patriarchy, and capitalism
● To build a space for people to feel safe in addressing systems that are here to kill us all

Hateful groups tried to use our home, Charlottesville, to further their racist/ sexist/ homophobic/ Islamophobic/ anti-Semitic agenda. Now, as a community, we need to reckon with what that means. We will take the momentum built — in this moment of mobilization, this strength of solidarity, this righteous outrage — to end racial oppression and make reparations, in Charlottesville and across America. [emphasis added]

The silence is deafening.