Home News Fredericksburg’s Stumbling Block And The Legacy of Enslavement 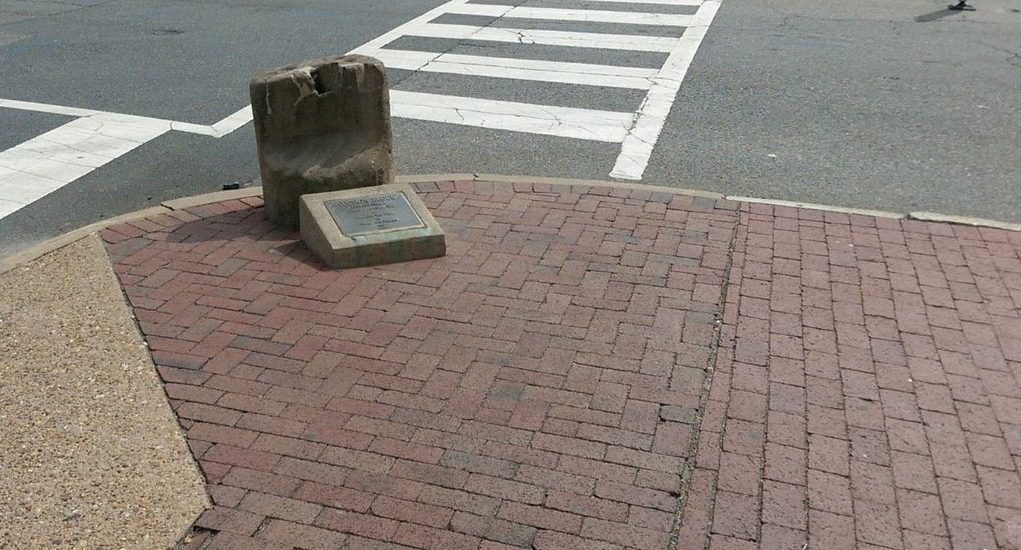 My grandfather pointed out the auction block on the corner of William and Charles Street when I was a young child.

The picture he painted was vivid, and it was in the manner that my grandfather was nearly famous for explaining history in just such a way that placed you there in the middle of the scene.  Think of your own mother on that step being sold, knowing that you would never see yourself or your brothers ever again and how sad that would make you feel.  Think of how helpless you would feel, knowing that even if you asked people to stop it, no one would listen…

Back in the 1920s, Fredericksburg’s city fathers understood this clearly and did everything they could to separate their Civil War history from the Revolutionary War history of the city itself.  The War of the Rebellion, it would be told, was something that happened to Fredericksburg — not something that happened in Fredericksburg.  When the option came to build monuments, Fredericksburg chose not to remember its Confederate war dead, but rather the memory of General Hugh Mercer, a Scottish merchant who built an apothecary shop on Caroline Street for 18 months before falling at the Battle of Saratoga in 1777.

Thus the argument ran regarding this peculiar block of limestone at the corner of William and Charles in front of the old Planter’s Hotel:

In 1924, the local Chamber of Commerce petitioned City Council to remove the block.  In reporting the request, the Fredericksburg Daily Star (July 9, 1924) recorded,  “The communication stated that the rock was not a slave block but was used years ago as a base for ladies to mount horses.”  Moreover, the Chamber argued, the portrayal of the stone “to tourists as a place of selling slaves… may serve somewhat to keep alive the sectional feeling which has long ago since disappeared.”  Council referred the matter to the Public Interest Committee for further investigation.

Little did I know that the vision of myself being sold on an auction block indeed had a historic corollary — Mr. Albert Crutchfield, at the ripe age of 5, would “distinctly remember” being sold on that stone base as a child.

What is interesting is that John Goolrick Sr. — who originally decried the historical evidence that the block was anything other than a grumbling point — was eventually refuted by none other than his son (and for my younger years, a mentor and political confidant) Mr. John Goolrick Jr.:

After John T. Goolrick died in 1925, his son took up the historical pen.  John Goolrick Jr. wrote several books and frequently referenced the block; he clearly found his father’s arguments that the block had no connection to slaves unconvincing.  Indeed, the younger Goolrick (who popularized the title “Fredericksburg: America’s Most Historic City”) wrote that the block was placed by his grandfather, the diversely aggressive Peter Goolrick, “and that slaves were sold upon it before the war, and even in the time of war.”  It was, said John Goolrick Jr., “intended for a horse-block, but it became soon, by general consent, also the market place for slaves.”

The problem here is twofold:

(1)  The auction block itself was not merely the only auction block in Fredericksburg, but one of three (the most notable of which is the corner of William and Sophia Streets).  Efforts of the Fredericksburg city fathers back in the 1920s to eradicate the visible evidence of the slave trade in Fredericksburg were not focused on all of the blocks — just the “stumbling block” most visible to potential tourists.

(2)  Remember the motivation for tearing down the auction block to begin with was not because it was a monument to slavery that needed to be remembered and honored, but because of a dubious historical connection to the act of selling enslaved persons that the history could effectively be broken up and removed.  In short, it was the historical equivalent to bulldozing a concentration camp in the hopes that its significance would be effaced from memory.

This brings to mind the German solution of Stolperstein — quite literally, stumbling blocks — in places that commemorate the Jewish Holocaust.

Originally a concept in 1992, these stumbling blocks would gain relevancy wherever historical evidence of a tragedy occurred.  From NPR:

On a recent afternoon, the 62-year-old Berlin-born artist is on his knees on a sidewalk in a prosperous section of Berlin’s Charlottenburg district, working a hammer and small trowel. He is installing dozens of small, square brass bricks, each one inscribed with the name — and details about the death of — people who once lived in apartment houses on Pestalozzi Strasse.

“Today we are laying 45 stones for Jewish victims that lived in these houses,” Demnig says as he secures the brass brick for Martin Lwowski, a former resident deported in 1943 and murdered at Auschwitz.

Wearing a cowboy hat and denim from head to toe, Demnig is watched by a quiet throng, many dressed in their Sunday, or Sabbath, best, out of respect for the dead. He first got the idea for the Stolperstein, or “stumbling stones,” as part of an art project back in the mid-1990s when he installed 55 such commemorative stones in Berlin sidewalks.

In the ensuing years, the project has mushroomed. Now, there are more than 30,000 commemorative bricks in dozens of cities and towns across Germany.

Here’s what they look like in practice… and when you see a street filled with them, one gets a sense that the difference between one tragedy and a million tragedies, we begin to pull the humanity out of the statistics.

Fredericksburg natives understand the Slave Auction Block for what it is — a Stolperstein ahead of its time.

This is why the public outcry over removing it was so visceral and strong, not only from community leaders but from native Fredericksburg residents who understood the historical significance and the efforts to remove the stumbling block in the 1920s as part of a whitewashing project, catching not only the chattering class at the Fredericksburg Free Lance-Star off guard, but members of City Council as well.  To wit:

Eddie Hackler said that he has no evidence that his enslaved ancestors were sold at that auction block, and thinks it should remain where it is. He said moving it to the Fredericksburg Area Museum would be disastrous because it is devoid of African–American history.

“Removal would not remove the sins of Fredericksburg, but would lead people to believe that those sins have been forgiven,” he said.

Hackler’s further point about social conditions and “slavery by another name” as he reflected upon recidivism rates and the nature of Virginia’s prison system are worth considering as well — the stumbling blocks we should all be talking about, not hiding.

The brief debate over removing these stumbling blocks should serve as a reminder that the social conditions that followed from the war through the Jim Crow experience and into the system of state-supported welfare and abortion has not improved the conditions of the poor and downtrodden by one inch.

Leaving the physical manifestations of that reality as a reminder — whether on a cobblestone street in Germany or on a sidewalk in Fredericksburg — serves to place Virginia’s history and social manifestations in plain view for all to see and discuss.

That matters, folks.  It desperately matters.