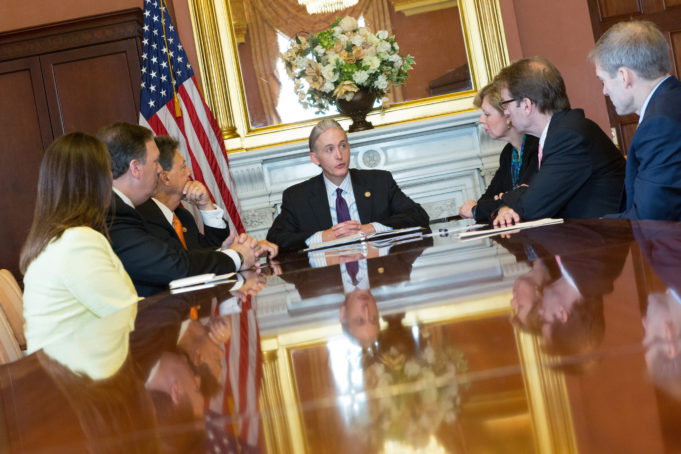 After President Donald Trump asked for the resignation of Attorney General Jeff Sessions yesterday, following a two-year strained relationship, Sessions’ chief of staff Matthew Whitaker was tapped by the commander-in-chief to be the acting attorney general. Although a replacement has yet to be named, with many urging the President to move quickly, a few big names are reportedly being considered.

Nevertheless, one name that is not on any reported list, but arguably should be, is retiring Congressman Trey Gowdy (SC-4).

In 2015, then-Republican nominee Trump named Gowdy as a possible pick for Attorney General, but the senior South Carolina representative remarked that he wanted to remain in his congressional seat. As a former prosecutor and Chairman of the House Oversight Committee, Gowdy has shown himself as a fiery litigator and a pitbull investigator during many oversight investigations.

Gowdy chaired the House Select Committee on Events Surrounding the 2012 Terrorist Attack in Benghazi which was partly responsible for discovering the existence of former Secretary of State Hillary Clinton’s private email server which was riddled with tens of thousands of official and classified correspondence pieces. In 2016, Gowdy even pushed for Clinton’s prosecution while she was the Democratic presidential nominee.

While many may see a Gowdy nomination as threatening to White House Special Counsel Robert Mueller’s investigation into Russian meddling in the 2016 presidential election, the job of attorney general goes much further than that.

It is not a surprise that Sessions did not match the energy of President Trump. If the President wants an energetic attorney general, Gowdy, the man with a never-ending hairstyle, would be a fantastic choice for the job for an administration that seeks to promote “law and order.”