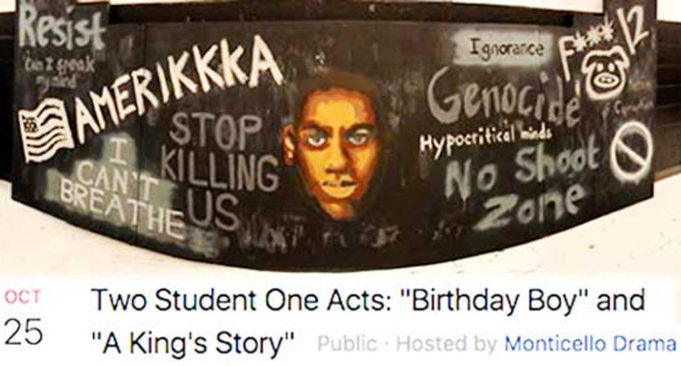 A King’s Story, written by MHS student, Josh St. Hill, examines the death and societal aftermath of a fictional black Charlottesville teen killed by the bullet of a white police officer.

In an interview with the Charlottesville Daily Progress, St. Hill said the play was inspired by recent national and local events:

“Nobody wants bad things to keep happening,” he added. “Nobody wants to see somebody die, but to see that happening in your own backyard, I feel like it’s just going to open up people’s eyes even more to understand the message and the rawness of this play.”

A “Monticello Drama” Facebook account (presumably curated by Michel) features promotional photography for A King’s Story depicting what appears to be a production set piece on display at MHS. The graffiti-covered wall shows an illustration of a young black male framed by inflammatory anti-police, anti-America imagery and rhetoric such as:

Perhaps illuminating the political bent behind the selection of current and previous dramatic presentations at MHS is Monticello Drama’s Twitter account—again, presumably overseen by Ms. Michel. Along with the anticipated promotion of school productions and individual talent, tweets and re-tweets are rife with overt, one-sided political commentary/advocacy on topics like:

While none of these entities questioned the right of Monticello High School to perform A King’s Story, they all challenged the wisdom of doing so.