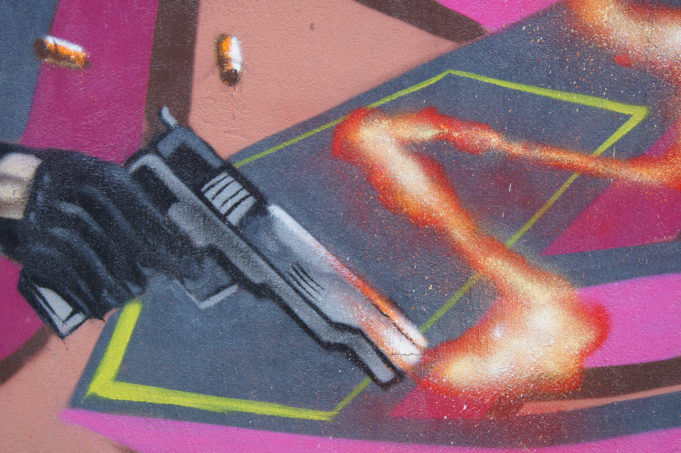 After every shooting, whether it’s in a school, mall, place of business, or even out in America’s streets, guns are blamed for perpetuating violence.

Typically, less than 24 hours after “thoughts and prayers” are left with the families of the victims of shootings, some politician appears on television and proclaims more “common sense gun control” is needed to thwart future scenarios where life is endangered by the presence of a firearm.

The fact is that guns, firearms, weapons, or any other type of munition is not the cause of these tragic events. Yes, they are the tools used in the carrying out a violent event, but they are not the root cause of the violence itself.

In a report from the Wall Street Journal, the father calls his son a “good boy” and the reason behind the violent event was that the Texas high school student was “mistreated at school.”

The elder Pagourtzis that his son Dimitrios was bullied and “‘I believe that’s what was behind’ the shooting,” he said in a recent interview.

On Friday morning at Santa Fe High School near Houston, Texas, Dimitrios was armed with a Remington shotgun and .38-caliber pistol and opened fire, killing 10 and wounding another 10 before surrendering to police.

The Santa Fe Independent School District has not responded to requests for comment on whether Dimitrios Pagourtzis was bullied at school. Furthermore, they have denied reports that he was bullied by high school coaches.

Nicholas Poehl, a lawyer hired by the Pagourtzis family to represent their son, said Monday that the teen had been bullied but declined to go into specifics.

The elder Pagourtzis has confirmed the guns that were used in the shooting were his. “I have guns, I am a hunter and had a farm which I rented in the 1980s,” he said in a interview with a Greek television station. “The guns in my house are legal and declared.”

The March for Lives, David Hogg, Piers Morgan, and a slew of disingenuous progressives have done nothing to “stop” gun violence; pretty much because they have no idea what they are talking about.

People must ask themselves the question: is there an inherent nature of humans to be violent?

Humans have a powerful instinct to benefit themselves, which is our natural morality, thus our self-preservation. It is our nature to see what we perceive to benefit us as being good and right.

Though, it is also our nature to see what harms us or what is bad and wrong. We may see that a certain scenario or ideal may harm us in some way, but we do a cost-benefit analysis to determine the overall benefit according to out own self interest.

People understand that stealing is wrong, but many can experience a benefit through actions of theft that makes them feel that the wrongful, immoral action results in obtaining good.

There is no motive for committing actions that are right or wrong, which bring no perceived benefit – basic utilitarianism.

Is it really that some people can commit horrible actions with no sensible benefit in mind? No, most likely not, based on the aforementioned physiological principle.

Moreover, do all humans, to the extent that they suffer pain, instinctually seek to relieve their suffering?

Socrates believed that people who seek their benefits are not trying to do wrong to themselves. In other words, that to do act for the sake of wrongdoing in of itself would be philosophically impossible, save for a few extreme psychopaths. But acting upon violence for the sake of obtaining the perceived good with which they are trying to improve their lives, yes, it could happen.

While it cannot be founded that the Texas high school shooter carried out his violence because he knew it would not bring him a world of wrongdoing, ending with legal punishment and possible moral dilemma, he may have perceived that such an unspeakable act of violence was to him, in fact, a better outcome than living through the alleged bullying.

This, however, is something that cannot be legislated. A Republic, or any other from of government, cannot legislate based on complete philosophical principles. This is why we have legal positivism.

Legal positivism is the reaction against natural law, wherein there is a distinction between law governing humans, deemed legally pragmatic, and law governing morality, which is based on complete altruism.

Combating the nature of violence takes every member of society to disregard inherent utilitarianism in favor of altruism. However, humans are not made this way.

Religion gives humans aid in this effort – a sort of utilitarianism against utilitarianism. Though, different religions give different aids to outcome of societal situations.

The greatest minds in philosophy, religion, and advocacy have tried to take on this daunting task of quantifying violence so that it may be eliminated. There have been many good ideas, some bad ideas, but none that can solve the cosmic equation.

Unfortunately, humans work on perceived benefit – like in the Nash equilibrium, where every person in a group makes the best decision for themselves based on what they think the others will do.