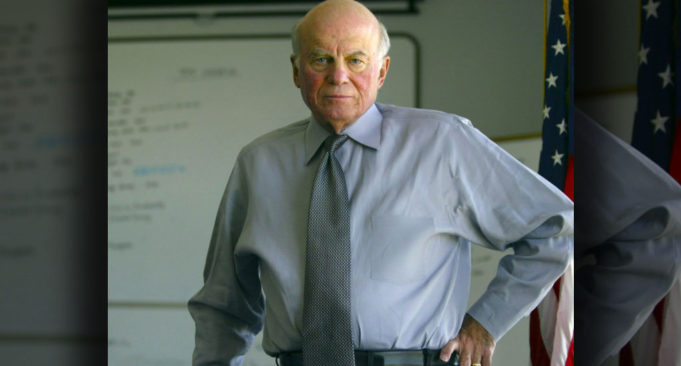 As I documented in my book TAKEOVER, on October 27, 1964 just a week before the election, Ronald Reagan delivered on behalf of Senator Barry Goldwater’s faltering presidential campaign what became known in conservative circles as “the speech.”

A week out from what was to be an electoral defeat of epic proportions, the establishment media largely ignored “A Time for Choosing,” but it did two things that were essential to the rise of Ronald Reagan and Reaganism: First, in its substance Reagan didn’t talk only to Republicans or conservatives, he spoke to all Americans selling the conservative ideas that would make him president. Second, he established the effectiveness of the extended TV speech as a means of taking conservative ideas directly to the American people by offering them in a format outside the 30 second TV commercial and free of the liberal filter of the establishment news media.

Ronald Reagan regularly made use of that technique as a candidate and as President, and we urge President Trump to do the same to sell the public on the necessity of building an effective wall at our southern border.

Conservatives who are President Trump’s staunchest supporters on the issues of border security and preserving American sovereignty and exceptionalism are well aware of the dangers and the costs of the Far-Left Democrats’ open borders policies.

The President’s economic nationalist supporters are equally aware of the economic and quality of life benefits to American workers and their families of not diluting the American workforce with millions of low-skilled, low-wage illegal aliens.

However, millions of fair-minded Americans, who may be open to the Left’s stories of persecution and hardship on behalf of the illegal border crossers they are inducing to come to America have not heard about the deleterious effects of illegal entry into our country.

Those millions of fair-minded Americans are exactly the voters President Trump must convince to win re-election, and as Benjamin R. Dierker pointed out in an article for The Federalist, the media has kept national coverage of the border wall deceptively superficial, limiting the President’s appeal to those persuadable voters who aren’t getting all the facts on border security from the establishment media.

If voters think about the border wall in limited terms, they will only see limited benefits, making it unlikely they will join the Trump coalition in 2020. If President Trump takes his case directly to the people, he can bypass those in the establishment media who refuse to acknowledge that while a wall is a clear deterrent to illegal immigration, it will also protect and improve the lives of millions of Americans in less than obvious ways.

By creating an effective deterrent, says Dierker, a border wall minimizes the pull factor of illegal immigration. A child or family is less likely to take a perilous journey just to end up staring up at a 30-foot wall or being turned around by security personnel.

A border wall saves lives by reducing weaponry, drugs, and human trafficking, while protecting the environment from devastating impacts. Since 2009, heroin seizures at the southwestern border have almost tripled, while meth seizures quintupled through 2014. What’s more, according to the San Diego Union-Tribune, 80 percent of the fentanyl coming into the United States enters through the San Diego border before dispersing throughout the country to claim over 30,000 lives a year.

It is only rational to construct a barrier between dangerous places and safe ones. And as Benjamin R. Dierker observed in his piece for The Federalist, one Mexican state bordering the United States is subject to the strictest travel warnings the State Department issues, due to criminal activity and violence. Two Mexican border cities were ranked among the top most dangerous in the world. The wall would reduce the spillover of violence, drugs, and burglary that plague so many along the border.

Our friend Jenny Beth Martin, of Tea Party Patriots, in an op-ed for Breitbart made the case to President Trump for a primetime presidential address on border security this way:

You hold the most powerful office in the world, and it is your obligation as President to use all the tools at your disposal to effect the change you promised.

Please, begin with a prime-time address from the Oval Office.

The presidential primetime address is so valuable a tool to focus the concentration of the citizenry that it has been referred to as “the single greatest home-court advantage in the modern world.”

The Left has made its opposition to the border wall clear, not only through direct commentary, but by what they leave out. Clear benefits of a border wall are being ignored, and only you, Mr. President, using the proven technique of a primetime TV address pioneered by President Ronald Reagan can make those benefits known to the American people.

We urge CHQ readers and friends to lend their voices to our “Don’t Waste The Lame Duck, Build The Wall” campaign. Click the link above to send a letter to Republicans in Congress demanding that the GOP stand with President Trump and fund the wall on our southern border, call the White House at 202-456-1111 or use this link to email the White House to let President Trump know you back him and want him to take his case to the nation via a primetime television address.

RICHARD A. VIGUERIE is often called the “Funding Father of the conservative movement.” Viguerie transformed American politics in the 1960s and ’70s by pioneering the use of direct mail as a means for conservatives to bypass the mainstream media. He serves as the chairman of American Target Advertising a 75-person direct marketing firm and of www.ConservativeHQ.com. The author of a number of books on politics and the conservative movement, Viguerie’s latest book is TAKEOVER: the 100-year War for the Soul of the GOP and How Conservatives Can Finally Win It. As Chairman of FedUp PAC, Mr. Viguerie’s pre-election appeal to Catholic voters in the key states of Florida, Pennsylvania, Michigan, Wisconsin and Ohio are credited by many with helping swing the 2016 election to Donald Trump.