The conservative movement in Virginia’s greatest assets are its people and their passion. There’s a dedicated corps of activists who support our Republican candidates – with their time, their talents, and their donations – every year through the ups and downs of local, state, and federal elections. And we’re also very fortunate to have a seemingly inexhaustible supply of quality, hard-working candidates willing to put their names on the ballot and run as Republicans. But our party – the specific institution that is the Republican Party of Virginia – must do more to support them.

We’re all too aware that it’s been more than a decade since a Republican has won statewide in our Commonwealth and in the intervening decade we’ve witnessed the decline of our share of elected offices at the local level and dual losses of General Assembly majorities in Richmond.

If we want to recommit ourselves to being an effective political party in Virginia that offers voters a real alternative to liberal single-party rule, it’s time to build and grow our party. Here’s how I propose we achieve that.

In 2019, the Republican Party of Virginia had just 5 grassroots donations – that’s not a typo, five! The Democratic Party of Virginia, by comparison, had more than 1,000. Over the last decade, Virginia Republicans have completely given up in terms of online fundraising. The Democrats are exploiting this advantage and we’re seeing its effects most dramatically in critical down-ballot races. 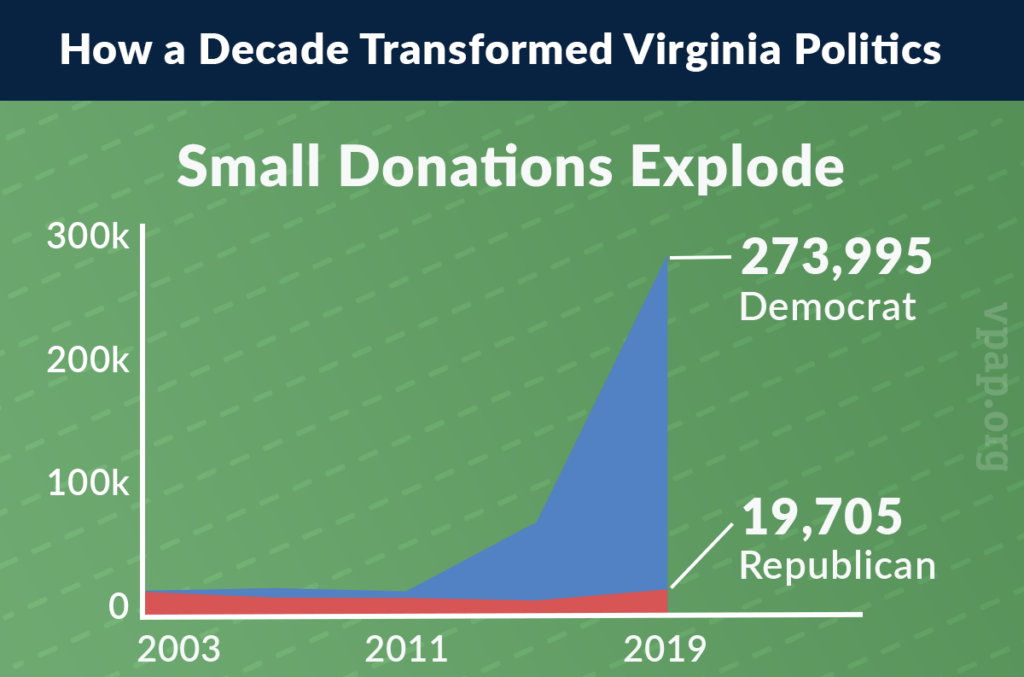 As we see in this chart from the Virginia Public Access Project, statewide the Democrats have a nearly 14 times advantage over Republicans when it comes to grassroots donors. That’s a lead they’ve built in the last eight years while our side has remained stagnant.

The RPV must devote substantial resources to building email and text messaging fundraising programs if Republicans are ever going to become competitive with the Democrats in this space.

Republicans face another structural deficit when it comes to registering voters in the commonwealth. Since 2013, more than 575,000 new voters have registered in Virginia. That’s a growth of 12% in the last six years, but the growth has been SLOWEST in our most Republican parts of the state. Virginia’s 2nd, 5th, and 9th congressional districts are each below the statewide average in single digits. 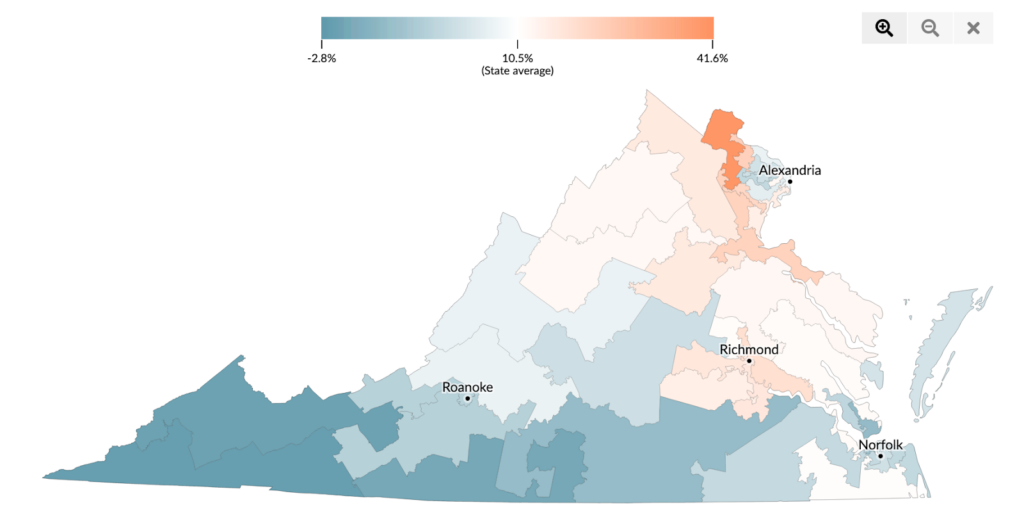 Only the RPV can take the lead on narrowing this gap. As demographics shift and population centers change in Virginia, Republicans can no longer avoid the hard work of party building and registering voters.

The math is simple. Republicans cannot win statewide simply by relying on a few rural strongholds while remaining uncompetitive with suburban voters. Only in extraordinary circumstances could a Republican win in the 8th Congressional District, where I live, but Republican voters here can deliver more votes to statewide candidates.

The RPV should work with local units in suburban parts of the state to set incremental goals for increasing Republican turnout to level the playing field for our statewide candidates. One of the ways we can achieve this is to make sure Republicans have candidates to vote for locally. The state party can do more to recruit candidates in noncompetitive elections and be more welcoming to new members.

For too long, our state Republican party has been preoccupied with meaningless process fights that don’t bring our party any closer to winning. It’s time for RPV leadership to keep the focus on building and growing the party. If and when the Republican party becomes competitive again in Virginia, we can revisit these debates if we must, but at this stage, they are merely academic questions.

It’s undeniable that demographics have shifted in Virginia, but the simple fact is the Republican Party of Virginia has not done its part to build the infrastructure a modern state party needs to have in place to be successful. It’s time to refocus our efforts on building and growing our party again.

Eric Wilson is a Republican digital strategist who lives in Alexandria and is a candidate for the Republican Party of Virginia’s State Central Committee. He was digital director on both of Ed Gillespie’s campaigns.