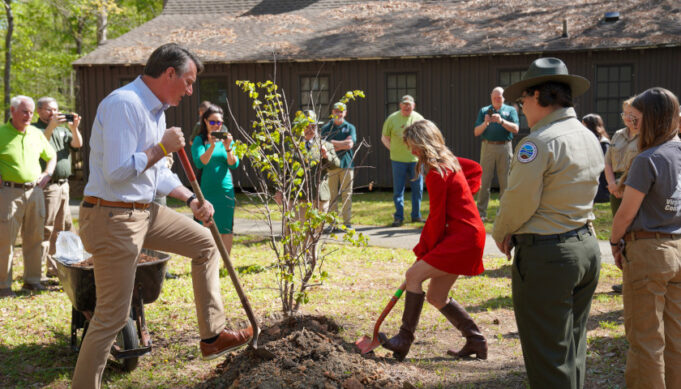 Governor Glenn Youngkin’s environmental policy is frustrating both environmentalists and hard-line Republicans. Since he took office, Youngkin has touted a middle road on energy policy although some Republicans think solar and wind are harmful for Virginia. On the other hand, Youngkin has reversed a plan to phase out single-use plastics for state agencies and tried unsuccessfully to withdraw from a regional greenhouse gas cap-and-trade program.

“We were obviously very disappointed in the direction that the administration is taking regarding offshore wind, but we’re not the only ones,” SUVGOP Senior Advisor Terry Johnson, a former Bush appointee, told The Virginia Star.

SUVGOP calls for repealing the Virginia Clean Economy Act and has hosted sessions for Republican Party of Virginia (RPV) insiders highlighting problems with solar farms and the Coastal Offshore Wind Project. Johnson’s also a senior advisor to Committee for a Constructive Tomorrow (CFACT), a conservative nonprofit.

Duimstra highlighted Youngkin’s opposition to the Regional Greenhouse Gas Initiative, Youngkin’s repeal of Northam’s single-use plastics state agency ban, and Executive Order 17 that Youngkin signed at the same time as the repeal of the plastics ban.

“Straight out of the American Chemistry Council playbook, Executive Order 17 ‘encourages the use of post-consumer recycled (PCR) products,’ incentivizing increased production of single-use plastics in order to develop waste centers,” VCN states on its website.

Duimstra also listed Youngkin’s call for a gas tax holiday, which VCN says would have harmed public transit budgets, impacting both the environment and low-income Virginians.

In response to a question about Youngkin’s guiding principles on environmental policy, his office sent remarks he made after signing EO 17 in April.

“I’m a conservationist. I believe that we can do incredible work in order to make sure that we have the cleanest water and the cleanest air. One of the things that I’m really, really focused on is making sure that we hit every one of our Chesapeake Bay goals, we must fulfill our obligation to clean up the bay. That’s why I am so supportive of the work being done with best management practices with our agricultural industry so that our streams are clean,” Youngkin said.

Although Youngkin was conspicuously absent from President Biden’s recent announcement of a federal-state offshore wind partnership with East Coast governors, Youngkin’s office reiterated his commitment to wind power and economic development in Virginia.

Youngkin’s office sent a statement to The Star that was originally sent to The Virginia Mercury.

“The Commonwealth has already become a leader for the offshore wind industry and the Youngkin administration is focused on the economic development opportunities presented by this emerging sector in a way that is consistent with Virginia’s right-to-work philosophy. The governor supports and is fully committed to Virginia’s offshore wind project but is vital that any future offshore wind development meets Virginia’s economic needs and protects ratepayers from high energy costs,” Spokesperson Macaulay Porter said.

Youngkin has hinted at using executive power to withdraw from RGGI, and ordered a report that Youngkin’s office said showed RGGI is a carbon tax on consumers. But the Democrat-controlled Senate challenged Youngkin’s authority to pull Virginia from the program through executive power. Youngkin hasn’t taken significant action on the VCEA, after legislation to repeal the VCEA was blocked by the Senate. And although Youngkin tried to appoint Trump’s EPA administrator Andrew Wheeler to head the Department of Natural and Historic Resources, Wheeler is now leading Youngkin’s effort to cut regulation in Virginia generally.

Johnson doesn’t expect Wheeler to do much to meet SUVGOP goals, and he’s frustrated with Youngkin’s limited use of executive power.

“The legislature’s split. He’s got executive action he can take, and he has so far moved forward in a way which  is unfortunate,” Johnson said.

Youngkin’s all-of-the-above energy policy more closely aligns with another conservative group, Conservatives for Clean Energy Virginia (CCE-VA), which has ties to officials within the RPV, Youngkin’s administration, and key legislators.

CCE-VA Director Ron Butler suggested that reversing the VCEA through executive power should be off the table.

“In Virginia, the Clean Economy Act was debated, passed and signed into law with some Republicans in support. The VCEA is currently the law and the law should be followed.  If future legislatures and governors agree to make changes they have the power to do so.  This is the proper way for government to work,” he told The Star.

“I also hope the recently passed HB 206, which adds many layers of needless regulation to solar projects, will also be addressed by the administration,” Butler said.