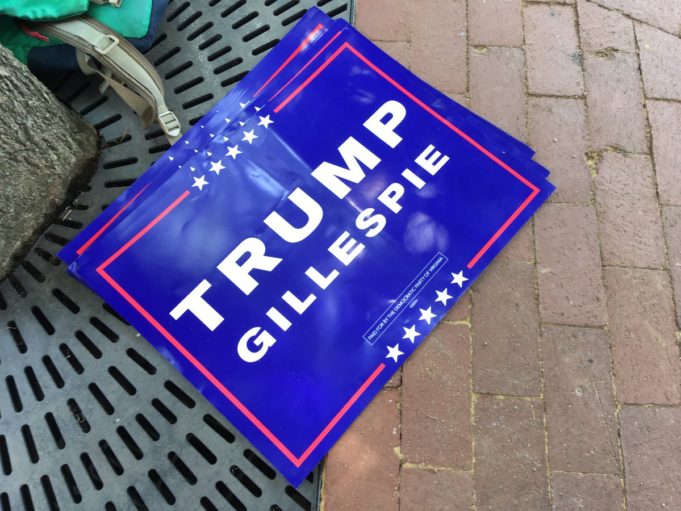 The League of Women Voters and AARP are asking that Northam reconsider his position of stonewalling debates, just hours after DPVA launches into a hate campaign so inane and silly, their own supporters refuse to carry the signs.

Here’s how bad things are right now.  The AARP and LWV debates are traditional, perennial debates that Northam is intentionally dodging.  In 2014, Senator Mark Warner participated in the very same event knowing that it was a marquee event.

Meanwhile, the Northam campaign’s creeping defeatism is starting to be noticed on Twitter and Facebook.  To wit?

They paid for this web site and are doing a tour around it???… https://t.co/Qc0IA5BYwM

Precisely what is “this” that everyone is screaming about?  It’s a website talking about how Trump and Gillespie are best friends forever…

…you know, the thing that Democrats had been telling the media Republicans had a “split” in their own base between Stewart supporters and Gillespie supporters?  Now we’re spending tens of thousands of dollars trying to manufacture one.

Gillespie is running a disciplined campaign hungry for victory while Northam is punching the clock.

What’s their prize production?  The worst GIF in the history of GIFs — a creature that would have made the Dole/Kemp ’96 campaign proud as toast, their stomachs protruding from between their suspenders as their thumbs reached up for the gold clasps and the cigars fumbled in their mouths.  “Yessiree — that’ll move numbahs!”

Consider for a moment that someone thought this was an excellent use of their time.  Just think about that for five seconds… it’s bad, isn’t it?

Consider further that someone at DPVA (or Team Northam) thought this was hilarious — and not just hilarious, but worthy of dissemination with website and manhours poured into this effort, one designed exclusively for the purpose of emphasizing that Trump and Gillespie are tied to the hip.

This is what DPVA is actually spending their donors’ money on, folks.

Don’t worry — this gets better.

Not only did DPVA and Team Northam put money down for serial stupid via this website, not only are they dodging debates… but DPVA actually bought and paid for rally signs that appear like Trump campaign signs, only with Gillespie as the running mate.  No joke, these actually exist (courtesy of C-Ville Weekly):

Of course, it must be all that campaigning that Northam is doing.  Too busy to check in one what his staffers are doing in his name… that must be it:

…or maybe Gillespie is running a disciplined campaign hungry for victory while Northam is punching the clock.

Despite the punchy observations here, facts are that not all is well at Team Northam and the DPVA at the moment.  Fundraising is down, House Republicans hold a commanding cash advantage, Herring’s warchest is being greedily eyeballed by the top of the Democratic ticket, Gillespie and Vogel are both raising cash at a faster pace than their opponents, RGA is in for $8 million so far, and the Republicans are being very consistent and steady with their contrast of Republican management vs. McAuliffe’s mismanagement (Greentech problems aside).

Question for the Dems: What changes in five weeks?