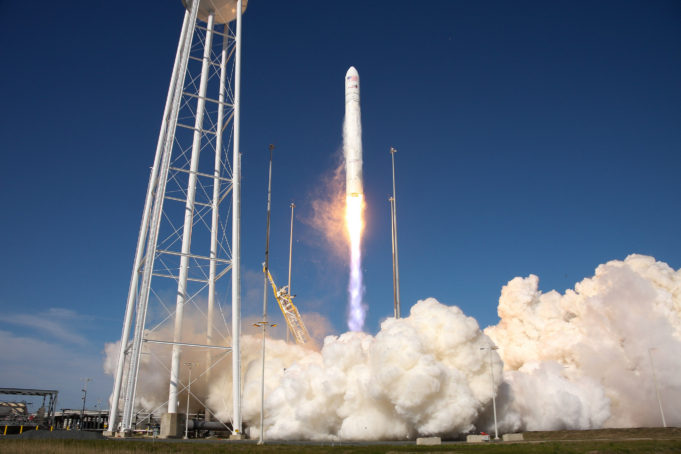 In the early hours of Monday morning, an Antares rocket launched with ground-shaking power from the NASA Wallops Flight Facility on the Eastern Shore of Virginia with a destination of the International Space Station (ISS) to resupply the orbital crew. The rocket left Earth at 4:44 a.m. just in between bouts of lightning and rain clouds that threatened to upset the launch.

“On dark nights like this, the launches just light up the sky,” said Matthew Gargol, a senior engineer at Orbital ATK, moments before launch as reported by the Daily Press. Orbital is a Dulles, Virginia-based space transportation company under commercial contract with NASA for unmanned cargo runs to the ISS.

“The blast of light, and then feel the rumble – you’re seeing it go before any of that hits you. It’s just an amazing feeling to see that go,” he explained.

A crowd cheered on Antares from a few miles away and applauded as it shot through the upper layers of the atmosphere. Just after the spacecraft left the ground, “Launch is over,” was announced by Daniel Huot, a spokesman at NASA Johnson Space Center in Houston. He then declared, “We did it.”

“Earth’s newest spacecraft launched this morning in a column of fire and roar,” said Kirk Shireman, ISS program manager at Johnson Space Center in Houston. He praised the near-perfect lift-off as the Cygnus cargo headed for low-Earth orbit to the station.

Before a launch is initiated, at least two local radars must be operating in terms of a “go” launch. For a short period of time, Wallops was working with two of the three they had with a chance of losing a second.

Reportedly, other issues were at hand. Some regulator valves had to be opened remotely to ensure sufficient gas flow on the craft and a small storm cell directly over the flight path triggered some temporary “lightning contraints.”

Nevertheless, Kurt Eberly, Antares deputy program manager at Orbital, said all were resolved by the end of the launch window, “and everything else was very smooth – we counted down right to the end with no further issues.”

He said it was, “a really good launch for us.”

The Cygnus cargo load is expected to arrive at the station around 5:20 a.m. EST Thursday, carrying nearly 7,400 pounds of payload – groceries and personal goods for the crew, hardware, and a host of science experiments.

The new experiments include investigating gene mutation rates in a space flight environment in real time, fundamental physics that can only be performed in the ultra-cold and motionless conditions of low-orbit microgravity, and a faster, more efficient way to use a safe strain of bio-engineered E. coli to produce the biofuel derivative – isobutene.

NASA says these experiments among many other are intended to further the agency’s long-term goal of manned mission to Mars and other planets, as well as future colonization.