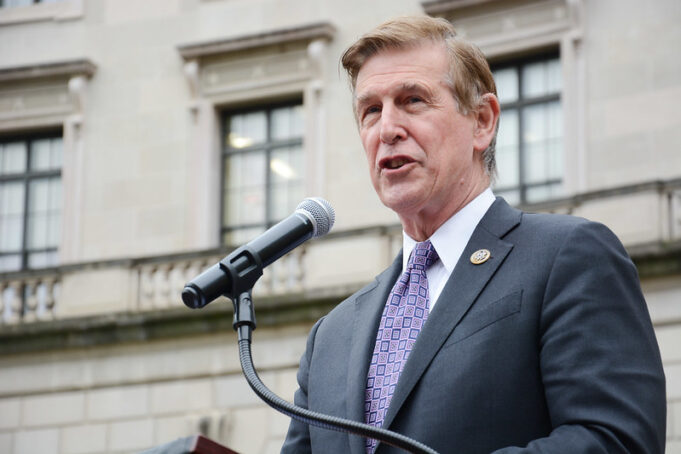 Congressman Don Beyer is in the news again for his poor oversight of personnel.

Beyer’s official Congressional Communications Director and Deputy Chief of Staff Aaron Fritschner is being called out by a number of conservatives on Twitter for being a political hack – on the taxpayer dime.

Politico, along with every other media outlet has been cornering New York’s embattled Freshman Congress George Santos for interviews, and due to the proximity of his office to Beyer’s, Fritschner has lent them a helping hand.

Politico reports the following in Huddle:

Weeks into the new Congress, the media circus surrounding the embattled freshman New Yorker has not let up. More than a dozen reporters and photographers are stationed outside his fledgling office whenever the House is in session. The New York Republican is accused of lying about everything from his credentials and volleyball career to his Jewish heritage and the stories keep coming.

“When the elevator doors open, it’s like a red carpet spray of cameras and like 10 lights that are like pointed at the elevator door,” one of Santos’ neighbors in Longworth described to Huddle. “I’m just like, ‘hey, sorry guys, I’m not him. I’m just gonna squeeze by real quick and go to my office.’”

Some staff on the hall are having more fun with it than others. Aaron Fritschner from Rep. Don Beyer’s (D-Va.) office has taken to flagging for the press hordes if he sees Santos exiting a side door, setting off a scramble to chase Santos.

“I’ve done it twice. Now. I’m gonna keep on doing it for as long as he’s there. And it seems like he’s not going anywhere,” Fritschner told Huddle.

This in no way excuses the actions of Santos, but constituents of VA-08 should be aware that their representative and his staff are more concerned with gaining cheap political points, rather than adequately serving their needs.

As previously noted, Fritschner’s actions drew the ire of several conservatives on Twitter.

Miranda Dabney – a staffer for the Republican Study Committee (RSC) –  paralleled the professionalism with which Republican vs Democrat Hill staffers handle themselves in their roles:

the difference between GOP and Dem staff is that we're decent human beings (who respect the chamber we work for) and… this.. is par for the course with Dems on the hill. pic.twitter.com/5D5n6RJOUe

Matt Whitlock – formerly of the National Republican Senatorial Committee (NRSC) – also shared concerns similar to my own over what Beyer’s team is doing on the taxpayer dime:

As a constituent of @DonBeyerVA I’d love it if his taxpayer-funded staff were focused on serving the district not playing George Santos spotter and bragging about it to reporters on the record. https://t.co/V6qK9H1sBX

Of course, this is nowhere near the first time that Team Beyer has made headlines for their lapsed judgment regarding members of their team. As previously reported in The Republican Standard, a former member of Beyer’s team was revealed to have ties to the Chinese Embassy in DC. That staffer was allegedly fired after the information was unearthed by National Review.