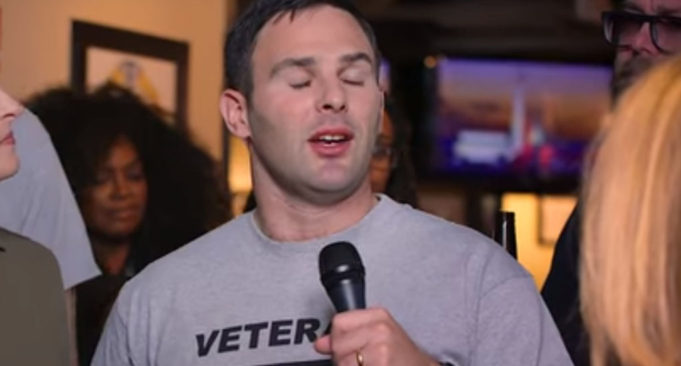 I feel the need, the need…to oh nevermind. Poor Millenials won’t even get the context behind this. => https://t.co/cbnpFDoY7p

…and then there’s Dan Helmer bad.

Seriously, this is horrible.  From AllahPundit over at Hot Air:

General observation: was Dan even alive when Top Gun was filmed?  More importantly, this is a stupid idea, one of those things that sounds good (at a bar?) but in practice turns out to be just generally dumb.  It’s so bad, I just might have to pour battery acid in my eyes so that no one will ever threaten me with watching this video.  Ever.

More to the point, how does this hurt Barbara Comstock in the slightest?  In fact, air it on television, guys (if that’s the correct gender pronoun — ’tis confusing nowadays).  Give it wide distribution…

Why?  Because this is precisely the sort of smug arrogance that most people believe about progressives.  As in, this is The Emmys sort of smug.  No one likes smug.  Dan Helmer comes off as, well… rather smug; the sort of guy who laughs at his own jokes that you know just aren’t funny, but feel duty-bound to politely chuckle with him so as not to hurt his feelings.  That sort of smug.

What’s more, apart from Dan Helmer playing central casting to his very own version of The Truman Show, precisely how self-centered do you have to be in order to think this video — production and all — was a marvelous idea?

David Drecker follows it up:

How old do you need to be to understand that this clip is a parody and to know what it’s lampooning? Forty? Imagine the horrified millennials who’ll watch it thinking it’s an original idea, wondering what the hell possessed Helmer to do this.

Time to update the invective, Dan.

Of course, all of this follows up on taped recordings of a Democratic 10th District meeting where rival Jennifer Wexton was caught attempting to rig the nomination contest, followed by fake websites popping up and then coming down in an effort to dust tracks.

Just a matter of time before this hilariously poor and smug messaging gets turned against fellow Democrats.

All in an expensive effort to find out who wants to lose to Comstock?

UPDATE:  It gets worse… Emily Singer over at Mic.com comments via Twitter:

I’ve seen a lot of campaign ads. A lot. This might be the worst I’ve ever seen. https://t.co/gnqaKf5Aj0

UPDATE x2:  QUICK QUIZ!  How many stripes are there on the American flag?

If you answered 13… then you haven’t spent enough time in the Helmer Zone.

Because apparently when you are running for U.S. House of Representatives railing against “out of touch” congressmen, the correct answer appears to be 11?

UPDATE x3:  Now to be fair, some of our fact-checkers at TRS did a bit of digging to see whether or not this might have been a tribute flag (or something else with 11 stripes).

This is the best we came up with.  So either (*cough*) too few stripes or too many stars… but we doubt the latter.