Once upon a time, Republicans were rocked to sleep with notions of momentum and enthusiasm in the closing weeks and days of a campaign. 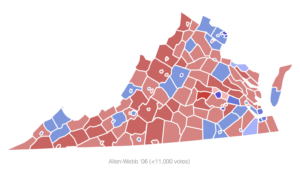 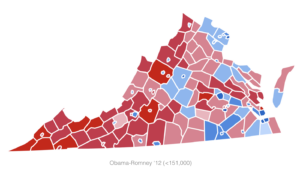 In 2013, Terry McAuliffe beat Ken Cuccinelli in a year that defied the tradition of “if you’re in, you’re out” with regards to who controlled the White House. Commonly thought to be a disaster, Cuccinelli outperformed Romney — losing by only 55,000 votes (2.6%) with a third party candidate tugging from the outside. 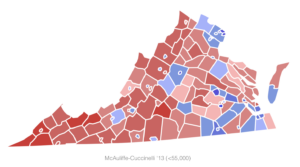 In 2014, Republican Ed Gillespie lost by roughly 18,000 votes to the most popular politician in Virginia — Democratic Senator Mark Warner in what was a Republican tidal wave: 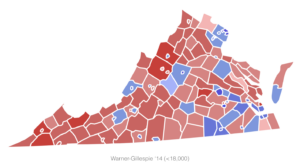 In 2016, Virginia’s suburban women shifted hard to the Democratic Party. The numbers were not kind; the numbers were not close. In 2017, these numbers were confirmed as Republican Ed Gillespie — thought to be the strongest card and running a campaign very similar to that of Glenn Youngkin — was smashed in a 9 point loss to Democrat Ralph Northam.

In 2018, former PWC Chairman Corey Stewart — an early supporter of Youngkin thanks to the Ted Cruz connection — was smashed in a 65-35 repudiation.

Heck — no one is going to remember this map: 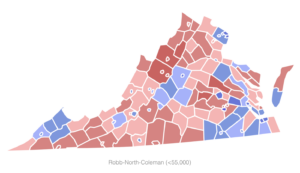 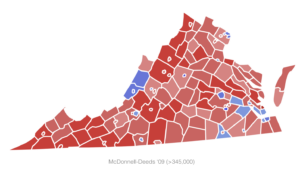 Some Tough Questions We Need To Ask Heading Into Tuesday:

Where Does the Election Honestly Stand?

Republicans are going to take back the House of Delegates and should recapture both the Attorney General and Lieutenant Governor’s seats.

Glenn Youngkin — I believe — will go into extra innings. Not because I think that he will lose (very much otherwise) but that the election will be so close that Biden Democrats will pull every punch to tip the scales.

One other item to consider? Early voting and absentee balloting.

You get more votes than the other guy.

In short, the Democrats have about a 150-180K advantage, if for no other reason than they are simply better at the game than we are. That might narrow, but once again we are going to see a Pennsylvania style result where Republicans think and feel they are winning based on what they see at the polls on Election Day — and then the Democrats will cash out their savings and Republicans will be shocked.

The voter fraud has already been committed. Once those ballots are opened and in the general population? There is no audit that can be performed.

Now whether a Republican General Assembly and a Republican governor can introduce strong Voter ID programs to protect one of the most fundamental rights we have as Americans — selecting our representatives in an open and democratic process — remains to be seen.

Yet the best way to prevent any sort of Tammany Hall sort of skullduggery is to simply win outright — as we mentioned before, get more votes than the other guy.

Of course, I have fellow friends who believe that Youngkin is up by 5 points. Others argue that McAuliffe is up by 2 points and will lose by November 15th (shorthand for saying that he is hemorrhaging votes, but not at a glide path that allows him to lose by November 2nd).

Terry McAuliffe isn’t just losing — he’s angry. It isn’t that McAuliffe’s mask dropped; McAuliffe is beating parents in the face with it.

Should McAuliffe win? Believe that he will do everything he has promised he will do: Critical Race Theory in schools, parents frogmarched out of school board meetings, gender ideology enforced in the classroom and the board room, economic malaise and a return of 0.0% GDP growth in Virginia.

My grandfather taught me a long time ago that — unlike the Soviet Union where votes were announced — you owed no man the right to know who you select in a voting booth. So you will never get from me who I will vote for, even if you can most likely predict whom. Not sure that requires a Nostradamus.

Yet I will say this.

Most conservatives are going to vote for Youngkin out of fear — yes, outright fear — of the political left in this country. They own 5 of the 7 institutions and are swiftly eroding the other two.

The left will use the institutions to hammer their values into society as so many little Robespierres with a Puritanical fervor reserved for the likes of Torquemada (that’s three tropes; it works and we all know it).

The duty of the right will be to devolve these institutions and provide the oxygen to separate society from government.

Reagan’s idiom of fixing the denominator and growing the numerator applies. Reducing the ability of the institutions to impose secular values and allowing the sacred to thrive hinges entirely on our ability to remain self-sufficient and self-reliant outside of the socialist net.

That starts and stops with devolving government education back to parents.

For that critical first step alone, Youngkin has been focused from Day One. For even the chance that we might see education reform, every conservative of every stripe — whether you supported Pete Snyder, Kirk Cox, Amanda Chase or Sergio de la Pena — owes it to themselves to give Virginia a chance to breathe again.

After November, it will be acta non verba.

Until November? Find 100 voters in your locality and drive them to the polls — it will be the margin of victory.