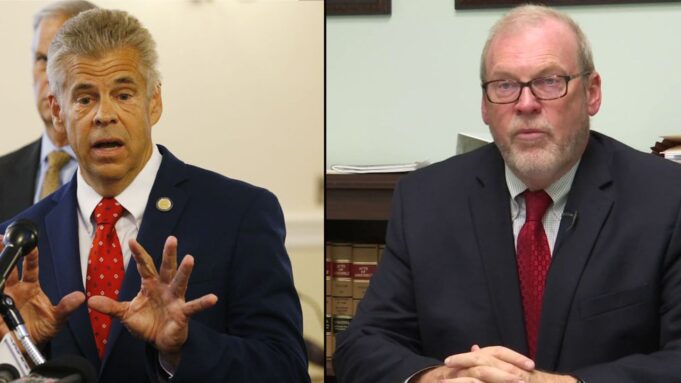 Often reluctant to insert himself in a Republican contest, Congressman Griffith’s endorsement carries with it a weight few others could match.

The Kirk Cox for Governor campaign released the following on the gubernatorial hopeful Cox’s big endorsement pick up:

“Congressman Morgan Griffith of Virginia’s 9th Congressional District endorsed Kirk Cox for Governor on Monday, citing their long-time friendship and Kirk’s ability to lead and govern on day one. Griffith is the first sitting Congressman to endorse a Republican candidate for Governor of Virginia.

Citing Delegate Cox’s leadership experience, Griffith is putting his full faith in the former Speaker to deliver results for Virginia as Governor.

“I had the privilege of working alongside Kirk for nearly 30 years in the House of Delegates and in House leadership. While we did not, and certainly never will, always agree on every issue, I can attest to Kirk’s ability to govern as a steady hand. I think that is more important than ever,” said Griffith. “Kirk isn’t flashy, but we’ve had flashy and headline-grabbing governors for the last eight years. It’s time for a governor whose first and only concern is working hard for Virginians.”

As previously mentioned, it isn’t often Griffith comes off the sideline in a contested nominating process, so his endorsement speaks volumes to his conviction of Cox’s ability to both win and lead. Kirk Cox, obviously grateful for the Congressman’s support, said the following in response:

“It is an honor to have a conservative and dear friend like Congressman Morgan Griffith endorse our campaign,” said Kirk. “Congressman Griffith, as the first Republican to hold the Majority Leader position since reconstruction, knows exactly what it takes to work together and earn the support for your ideas. To put an end to one-party Democratic rule in Virginia, our party must come together in every corner of the Commonwealth. With Morgan, Bill Carrico, Terry Kilgore, Will Wampler, Will Morefield, Nick Rush and dozens of others on our team in the Ninth District, I know we can and will win on May 8.”

Congressman Morgan Griffith is a massive pick up for the Cox for Governor team, but he isn’t alone in Kirk Cox’s expansive corner of support. Joining the Southwest champion is over 500 conservative elected and grassroots leaders. Among this long list are former Virginia Governor’s George Allen and Bob McDonnell, Congressman Tom Davis and State Senator Jeannemarie Davis, State Senator Bill Carrico, Congressman Randy Forbes and Shirley Forbes, and Bobbie Kilberg.

Roughly two months away from the nominating contest, Kirk Cox has amassed a widespread coalition across the party, indicating that he may be the unifier Republicans need to leave their decade-long statewide losing streak in the past — and win in November.