Delegate Tim Anderson (R-Virginia Beach) is calling for his fellow Virginia Republicans to break with Donald Trump after Republicans only flipped one of three competitive Democrat-held congressional districts in Virginia. 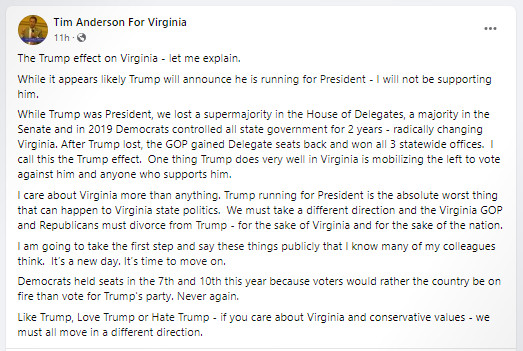 “While it appears likely Trump will announce he is running for President — I will not be supporting him,” Anderson said in a Facebook post on Wednesday morning. “While Trump was President, we lost a supermajority in the House of Delegates, a majority in the Senate and in 2019 Democrats controlled all state government for two years — radically changing Virginia. After Trump lost, the GOP gained Delegate seats back and won all three statewide offices. I call this the Trump effect. One thing Trump does very well in Virginia is mobilizing the left to vote against him and anyone who supports him.”

“I care about Virginia more than anything. Trump running for President is the absolute worst thing that can happen to Virginia state politics. We must take a different direction and the Virginia GOP and Republicans must divorce from Trump — for the sake of Virginia and for the sake of the nation,” Anderson continued.

“Democrats held seats in the seventh and tenth this year because voters would rather the country be on fire than vote for Trump’s party. Never again,” he said.

Virginia politicians and politicos are already looking at the next election in 2023, when all the general assembly seats will be up for election. Republicans hope to protect their House of Delegates majority and take the majority in the Senate, and will be running under new district lines, which create new opportunities, but which have also paired incumbents from both parties.

Anderson is a new delegate who was paired with Delegate Rob Bloxom (R-Accomack); the two Republicans will face off in a primary.

Bloxom told The Virginia Star that comments blaming Trump for losses in VA-07 and VA-10 were “too knee-jerk.”

“It’s interesting since they [Anderson and Trump] in my mind kind of think the same way,” Bloxom said.

Bloxom said that he is disappointed with the results overall, but said that he had been focused on VA-02, where State Senator Jen Kiggans (R-Virginia Beach) defeated incumbent U.S. Representative Elaine Luria (D-VA-02.) Kiggans was helped by redistricting that changed district demographics and picked up more rural areas, Bloxom said, but he highlighted Kiggan’s policies.

“I think Kiggans connected with the constituents well, too,” he said.

Trump endorsed Vega and her policies seem generally in line with the MAGA movement, but Trump never made an appearance in Virginia during the congressional races.

State Senator Bryce Reeves (R-Spotsylvania), who lives in VA-07 and lost the nomination race to Yesli Vega, told The Star Trump wasn’t involved in the race. Reeves co-chaired Trump’s campaign in Virginia in 2016.

“I don’t think it has anything really to do with Trump,” Reeves said, citing Spanberger’s money advantage and incumbency, which gave her name recognition.

“Those are the two biggest factors,” he said.

“People can kind of Monday-morning quarterback, it, but I think by and large, I think Abigail Spanberger, to her credit, could paint that she was a moderate. And she ran 10 times the ads that they could get on the air, and I think people started paying attention at the end, and there was some turnout,” Reeves said.

Reeves said that in VA-10, Hung Cao exceeded expectations, and praised his colleague Kiggans for her win.

“I’m excited for her to pick up that seat, and so you know, while we would have liked to have at least two of those three that were on the radar to flip, getting one is not a defeat, it’s still great,” Reeves said.

The Star asked what Reeves’ takeaways for 2023 from the 2022 elections are.

“We’ve got to work twice as hard with the 45-day early voting and tracking those things. We’ve got to raise almost three times the amount of money, and we’ve got to start off a lot earlier,” he said.

“My district hasn’t changed all that much, and so we’re fairly confident that we’re going to go into it eyes wide open and work twice as hard as we do every election, like we’re 20 points down,” he said.