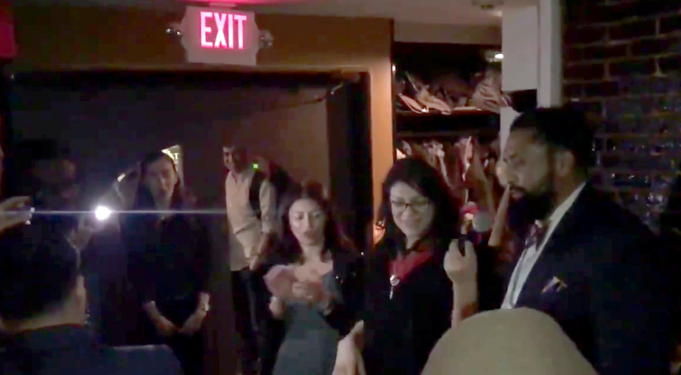 Just hours after being sworn in, Rep. Rashida Tlaib (D-MI) called for President Trump’s impeachment in a profane tirade filmed and posted online by an immigration activist attending an evening event with the lawmaker.

“Bullies don’t win, and I said baby, they don’t,” Tlaib remarked to a cheering crowd, recalling an earlier exchange with her son. “We’re going to go in there, and we’re going to impeach the motherf***er.”

.@RashidaTlaib saying it louder for the people in the back!! ✊?#116thCongress pic.twitter.com/VeUq0GwI5E

The first term lawmaker, who is a member of the Democratic Socialists of America, ran a congressional campaign strongly critical of President Trump.

Earlier that day, Tlaib called for for Democrats to begin impeachment proceedings against the president, in an op-ed published by the Detroit Free Press, planned for the day she was sworn in.

“President Donald Trump is a direct and serious threat to our country,” Tlaib wrote. “On an almost daily basis, he attacks our Constitution, our democracy, the rule of law, and the people who are in this country.”

Tlaib said impeachment was an appropriate remedy, which she urged Democrats to take up before Special Counsel Robert Mueller completes his investigation, saying further that impeachment proceedings do not require proof of criminal conduct.

“Those who say we must wait for Special Counsel Mueller to complete his criminal investigation before Congress can start any impeachment proceedings ignore this crucial distinction,” Tlaib continued. “There is no requirement whatsoever that a president be charged with or be convicted of a crime before Congress can impeach him.”

Tlaib was among the first lawmakers to call for abolishing ICE. As a member of the Democratic Socialists of America, she has embraced many of the usual left-wing policy priorities, including government-run health care and a $15 minimum wage.

An outspoken critic of Israel, Tlaib called for a one-state solution and opposes aid from the United States to the Jewish nation.

With Democrats now in control of the House Judiciary Committee, impeachment proceedings against the present could begin as soon as a resolution is introduced and considered by lawmakers on the committee.