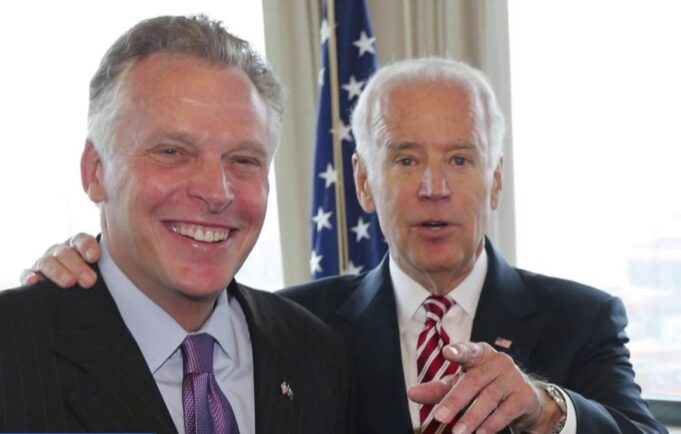 Republican nominee for governor Glenn Youngkin released the following statement regarding the explosive investigation conducted by the Richmond Times-Dispatch which revealed that the majority of the jobs deals Terry McAuliffe executed as governor failed to live up to McAuliffe’s promises. Out of 79 economic development deals McAuliffe touted, “32 didn’t produce a single new job in Virginia,” according to the paper, and 16 projects “didn’t perform as well or deliver jobs as quickly as promised.”

“Terry McAuliffe’s carefully crafted political image as a dealmaker and jobs creator is a mirage – the emperor has no clothes,” said Youngkin. “McAuliffe bragged about manufacturing that did not exist. He bragged about deals that did not exist. And he brags about creating jobs when in fact Virginia has been trounced by competitor states like North Carolina, South Carolina, Texas, Florida, Georgia, Tennessee, and even Maryland. The three major accomplishments McAuliffe touted in his 2015 State of the Commonwealth Address – Lindenberg Industries in Appomattox, UniTao Pharmaceuticals in Petersburg, and Tranlin Paper Company in Chesterfield – were all busts. The fact that McAuliffe is currently running TV ads promising to raise teacher pay and expand broadband when he made those same exact promises 12 years ago and 8 years ago proves that McAuliffe is a failed governor and an all-talk, no-action career politician who has no real accomplishments to speak of, so he makes them up. Isn’t it time for a governor who knows how to get things done?”

“All told [under McAuliffe], deals between the state and private companies promised Virginians 14,000 new jobs,” the Times-Dispatch reported. “Only 7,000 jobs came from these deals.”

The documentary movie “Fast Terry” reveals McAuliffe’s dishonesty about creating jobs in two cases: McAuliffe’s Chinese cash-for-visas scheme named Green Tech Automotive in Mississippi, and Franklin Pellets in Virginia. McAuliffe touted both companies as vibrant manufacturing facilities, when in fact there is no evidence that they ever were.

“Had Virginia employment grown at the competitor state average of 9.8%, Virginia would have added 394,140 jobs during Mr. McAuliffe‘s tenure as governor,” The Washington Times reported. Virginia added only 183,000 jobs when McAuliffe was governor, or less than half of what it should have compared to competitor states.

Currently, Virginia ranks 44th in the country when it comes to recovering jobs lost during the pandemic.