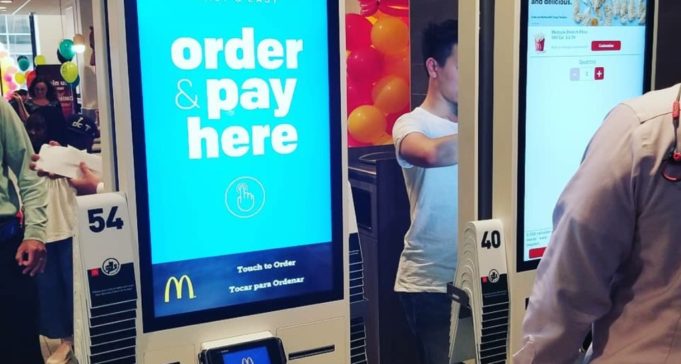 Ever have that feeling in your gut that if something occurred, bad things might happen?

This was more like watching some idiot jump in front of a train thinking a red cape would allow him to defy physics just like in the movies only to end up joining the list of Darwin Award recipients.

I first saw these machines in Estonia a couple years ago.  I was amazed at how efficient they made that McDonald’s compared to its American counterparts with cashiers. I was also thankful that it was not yet cost-effective in the United States for them to replace the jobs presently held by high school and college students and others just looking for a job to try and provide for their family while searching for something better.  That was until now.

In 2016, Washington DC passed legislation to increase the minimum wage annually until it reaches $15.00 an hour in 2020.  The result has been akin to watching a tractor trailer without a steering wheel play chicken with a well-meaning liberal on a moped.

The crash was only a matter of time, felt like a speed bump to one, and the other is still clueless as to what happened.

That legislation has recently resulted in the installation of order and payment machines like those pictured above and the impending loss of numerous jobs.  Ed Rensi, McDonald’s prior USA President for 13 years warned that this minimum wage increase “will mean wiping out thousands of entry-level opportunities for people without many other options.” But just like the eerie music in horror flicks, that warning went unheeded.

I only have one question for those short-sighted government leaders and restaurant union employees who fought for this legislation:  Which pays more and has better benefits, a minimum wage job or unemployment?

This year I nominate government leaders in Washington DC for the first-ever figurative Darwin Award.