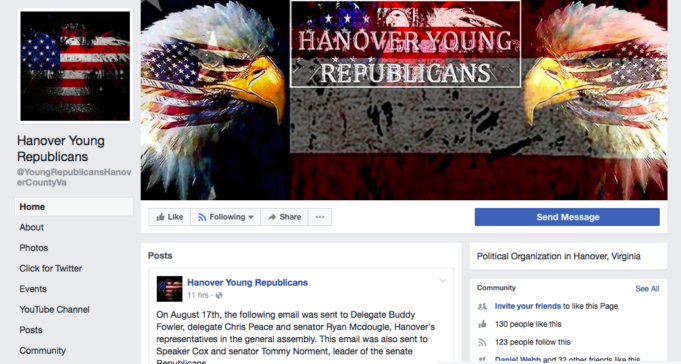 Fake news is dangerous to democracy.  Like any form of propaganda, it preys on the ignorance of its readers, appeals to their preconceived notions, and blurs the line between truths and lies. The keyboard warriors who hide their identities behind their computer screens as they try to promote their own objectives and mislead the public are the worst kind of liars.

Fake news has become so common on Facebook these days that it never really shocks me anymore. While I will occasionally bother to un-follow an individual or group page that shares fake news, most days I simply ignore it.

The record needs to be set straight about the credibility of this so-called YR group.

Yesterday morning, a Facebook page called the “Hanover Young Republicans” was brought to my attention. What I soon discovered was an embarrassingly extensive web of lies spun by individuals attacking members of the Hanover County Republican Committee — specifically our candidates and elected officials.

These so-called “Hanover YRs” took to their Facebook page this morning in order to attack Hanover’s elected representatives and Republican leadership in the General Assembly for not responding to an email sent to them on August 17, 2017.

The email in question outlined concerns regarding contradicting statements made by the Governor’s Office and the Virginia State Police regarding police action during the violent Charlottesville protests. The email also asks whether or not the legislator intends on calling for hearings over the dispute.

The post then proceeds to berate these elected officials for not responding to the original email or follow-up email, before questioning whether or not Delegate Buddy Fowler and Delegate Chris Peace “deserve to be re-elected”.

“Both of Hanover’s delegates, Fowler and Peace are running for re-election. They want your vote and say things publically to give the appearance of wanting to represent you. Personally I find them no different than the members of congress that said for years ‘repeal and replace’ and after winning control over the house, senate and presidency, have done nothing. If they only care about re-election, do they deserve to be re-elected?”

First off, Delegate Peace’s office did, in fact, respond to the email — written by Hanover GOP member Daryl Carr — letting him know that Delegate Peace was out of town and would respond when he returned. 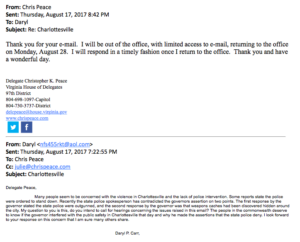 As promised, Delegate Peace responded in full this morning. 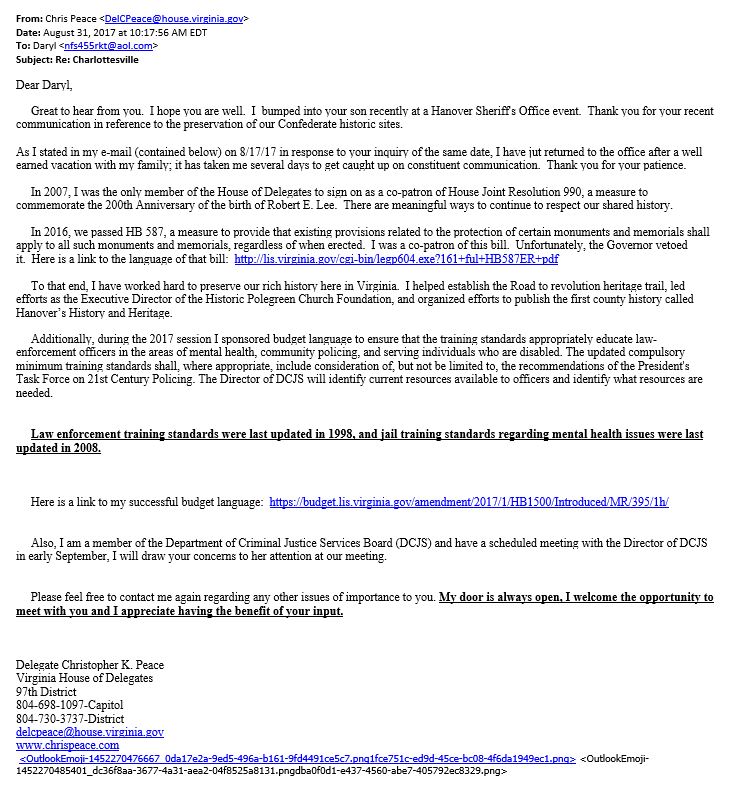 The record needs to be set straight about the credibility of this so-called YR group.

I am very committed to “growing the GOP younger” and would never discourage young grassroots conservatives from organizing. That’s why I messaged the Facebook group and asked for the contact information of the group’s chairman in order to discuss their involvement.

They have not responded. 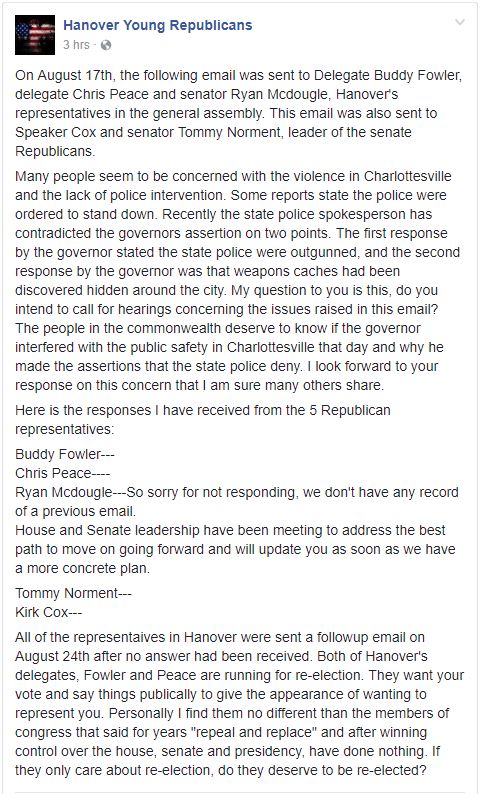 Apparently truth and transparency become null and void when the self-righteous stand on their soapboxes. The Hanover County GOP should not tolerate this type of dishonest behavior from false Republicans within their committee who openly violate the RPV Party Plan by opposing our duly nominated candidates for public office.

There is no place in the Republican Party for such deceitful, childish ploys. We need to be better than this. We need to focus on winning elections.

What we don’t need is more #FakeNews.