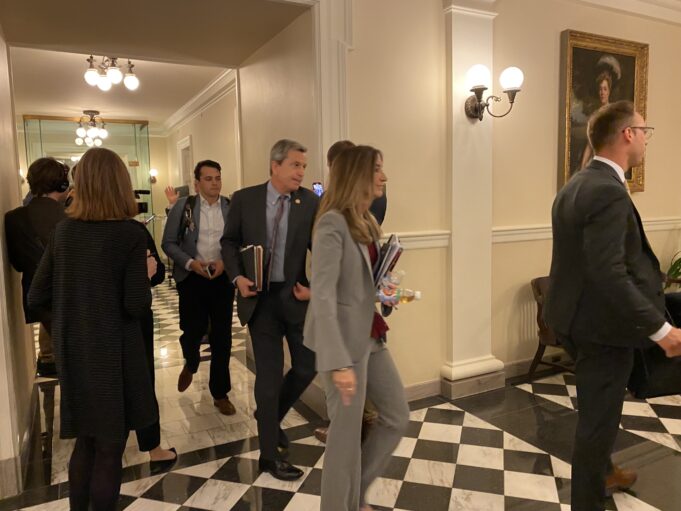 This isn’t precisely Filler-Corn at her best moment.

Which is perhaps what makes this newsworthy. Not because this is a further sign of the ‘Trumpification’ of media — surely Terry McAuliffe broke these taboos years before there was a Trump — or that it is Filler-Corn in her true colors. Or that this is a game of ‘gotcha’ which has been popularized in the legacy media ever since the macaca moment in 2006. Certainly not because if Governor Glenn Youngkin walked out of a committee room and flipped off reporters that it wouldn’t be national news and what’s good for the goose is good for the gander, etc.

Rather — what makes this notable the common vulgarity that percolates through.

Rather than rising above the din — Filler-Corn merely chose to join the common rabble and do something entirely vulgar and sadly expected.

Filler-Corn walking out of the House Democratic chambers and noticing the press (see left), whom she promptly ignores:

And then this gem:

Now I am sure there is some Democratic comms staffer who is going to say that this is just a hand gesture, playing with a paper clip, does it all the time, or some other line of bovine excrement that will play to political persuasions.

To which the rest of us can rightly respond with the word nonsense.

In fact, that is a superb middle finger gesture. Not the ham-fisted balled up meatball of rage with a single protruding phalange demonstrating to the world your defiance. This is a well-practiced, open-palmed, fully extended middle finger with index finger tucked skillfully under the thumb.

Almost Irish in its eloquence.

Now of course, maybe someone on the other side of the camera was flashing Filler-Corn the one-finger salute. Or maybe they were just telling her she was #1 in their book. Or maybe she was telling the press they were #1. Or maybe the press corps greeted her with a halo of middle fingers as she walked by?

What the rest of us should note isn’t that Filler-Corn decided to flip folks off as she walked past the press corps. Let’s concede that this is the sort of emotional response one should expect from folks nowadays — our ethics having been reduced to mere expression and advantage.

Wouldn’t it have been more notable for a former Speaker of the House to simply handle what is most likely a temporary condition with dignity and grace?

One supposes this is where things ought to be left right there.

Filler-Corn owes no one apologies for the vulgar gesture, to be sure. The only person she beclowned was herself.

That seems a particular shame, doesn’t it?