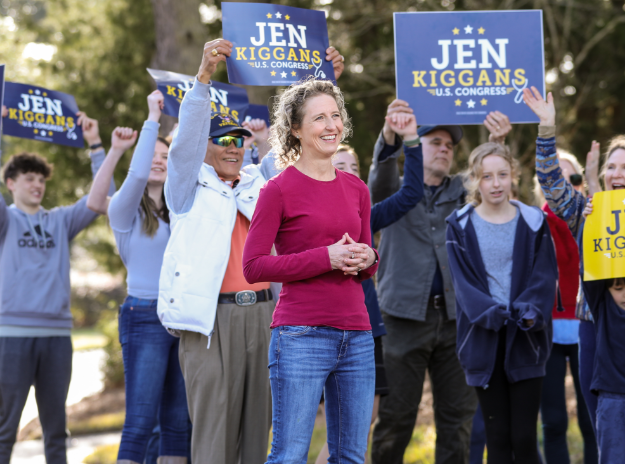 Jen Kiggans, the republican challenger for Virginia’s 2nd Congressional District, has gained some serious momentum as she has received ringing endorsements from some of the commonwealth’s top names in the Virginia GOP.

Running in Virginia’s second district against Democratic Rep. Elaine Luria, who has represented the district since 2018, Kiggans has been receiving support from the GOP all across the country, including House GOP Conference Chair Elise Stefanik, U.S. Sens. Tim Scott (R-SC) and Marsha Blackburn (R-TN) and former Secretary of State Mike Pompeo.

Now, Lt. Governor Winsome Sears has voiced her support for the Va-02 candidate with a news release, praising caring yet determined attitude.

🚨Endorsement Alert🚨
I am honored to have the endorsement of Lt. Gov. @WinsomeSears in my fight to win #VA02 and to restore American strength. It has been an honor to sit in the Virginia Senate with her at the helm, and I am so proud and thankful for her support! pic.twitter.com/1buErQNzsh

“Since taking office in January, I’ve had a front-row seat watching her bring fresh and common sense ideas to the Virginia Senate,” Earle-Sears said in a news release released Monday morning. “As a nurse practitioner, she brings caring. As a Navy helicopter pilot, she brings laser-focused determination and stays on target as she fights for our conservative values.”

Governor Youngkin, who endorsed Kiggans on July 13, also praised her as an “incredibly accomplished woman,” and “a problem solver.”

🚨 I am honored to have the endorsement and support of Gov. @GlennYoungkin! It’s again Virginia’s chance to lead the nation and play our part in defeating liberal one-party rule… Americans are struggling and #VA02 is on the frontline to flip the House and fire Nancy Pelosi. pic.twitter.com/UM1Y1ynFVz

“Jen will do what’s right for Virginians and our country, working to revitalize our economy, strengthen our military, and improve health care,” Youngkin said in a news release. “I’m proud to endorse and support Jen Kiggans, because she has the courage to fight for Virginia families and will deliver real results.”

In addition to GOP personal support, she was also recently highlighted in the National Republican Congressional Committee (NRCC) new “Project Spotlight” and shared with Fox News digital, which seeks to put a spotlight on top party recruits who represent what the House GOP reelection arm calls “the unique stories and diversity of the Republican Party in communities across the country.”

The show of support for Kiggans is massively important for a race that the Cook Political Report is predicting the election to be one of the closest in the November 2022 midterms across the country. While the lines of Virginia’s 2nd Congressional District were redrawn based on the 2020 U.S. Census, making it more favorable to Republicans, unseating Elaine Luria will take all the support she can get.