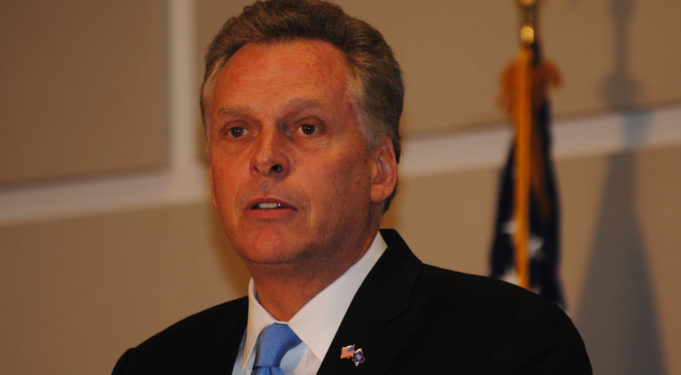 In the broad conveyance of brazen political actions, certainly there are lines to be drawn.  Things that might get pulled off in say, New Jersey, would strike a Virginian as beyond the pale — no?

This week’s installment comes from the League of Conservation Voters and Governor Terry McAuliffe.  Here’s the three step process:

(1) Northam finds out his pipeline problem isn’t limited to just Nelson County… Fairfax Democrats are pushing him further to the left as well,

(2) LCV gives $1.1 million to a floundering Norham campaign after publicly demanding something in return for their support in May 2017,

(3) Almost immediately after the check is cut that morning, later in the afternoon McAuliffe kowtows and comes out against offshore drilling in Virginia.

In their own words:

“We helped bring him to the governor’s mansion,” said Michael Town, executive director of the Virginia League of Conservation Voters, at a sparsely attended news conference Tuesday at the Capitol Square Bell Tower. “Now, at the end of that process, it is time for the governor to act. We’ve heard enough rhetoric; we’ve heard enough words. Now we need action, bold action by the governor to address climate change.”

..but $1.1 million in an apparent trade for McAuliffe’s opposition to offshore drilling?  Correlation doesn’t imply causality, to be sure — but don’t expect the rest of Virginia to swallow it clean.

Moreover, it shows precisely how desperate the Northam campaign is for resources — as well as how enthralled Northam is to his progressive base that has him tight and will not let him deviate from their own special brand of anti-energy orthodoxy.

…and so the For Sale sign goes up on the Governor’s Mansion.  Or at the very least, its policies.