Monmouth University shows the race shifting — but not necessarily tightening — as we head into the closing weeks of the Virginia gubernatorial contest, with Republican challenger Glenn Youngkin tied among registered voters yet down by 2 points against former Democratic governor Terry McAuliffe.

The largest shift? While independents have moved significantly over the last few weeks and Youngkin is polling slightly ahead of McAuliffe on education, it is COVID and the economy that is capturing dropping hands from their hearts to their wallets in the closing days of the 2021 gubernatorial election.

Three factors are bringing this race to the wire: 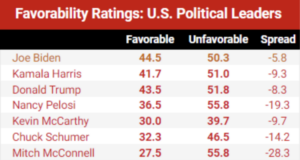 “A gaffe is when a politician tells the truth – some obvious truth he isn’t supposed to say.”

The Monmouth poll finds that a recent shift in voter issue priorities has helped Youngkin. The top issues chosen as the most important first or second factor in Virginians’ vote for governor are jobs and the economy (45%, up from 39% in September) and education and schools (41%, up from 31%). Just 23% name the Covid pandemic as one of their top two issues, which is a drop from 32% last month.

It is as if common sense and personal risk management is doing what leftists think government should do.

The real concern? Inflation matched with supply chain issues — issues that were magically not an issue under the former administration, but somehow managed to become an issue once Biden became president. In the words of Jimmy Carville, it’s the economy, stupid. McAuliffe took his eye off the ball; Youngkin focused early with his Day One Plan modeled after the ol’ Contract With Virginia.

Build Back Better turned into Lower Your Expectations super quick, didn’t it? 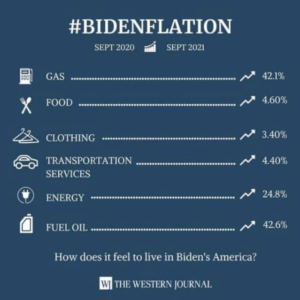 One small wrinkle? Monmouth is polling registered voters. When they do the data overlay for likely voters? McAuliffe is up by 2 points — precisely where the RCP averages say he should be:

A traditional “cut-off” model similar to what Monmouth used in elections prior to the 2018 midterm – which includes registered voters who cast a ballot in at least 2 of the last 4 general elections and report being “certain” or “likely” to vote, or have already voted – shows a close contest with 48% for McAuliffe and 46% for Youngkin.

Which means for all the headlines — including this one — showing an optimistic RV split of TIED! (TM), the reality is that McAuliffe is still edging out Youngkin by about 60,000 votes.

In 2009, Republican Bob McDonnell pulled off an incredible win that few people imagined — not that he won, but rather the Roman triumph of a win he created against a putatively weak Democratic contender in State Senator Creigh Deeds (D-Bath).

McDonnell won Fairfax County — barely. But the mere fact that he won Fairfax was evidence enough that McDonnell was going to do extremely well elsewhere (Fairfax tends to report last — apparently the numbers are transported by pack mule or something).

Assume for a moment that Republicans have a theoretical maximum in Fairfax of 139,000 votes. Assume likewise that the Democrats underperform with a POTUS in the low-40s and produce McAuliffe 2013 numbers at 179,000.

End result? Youngkin nabs 43% of the vote in Fairfax.

Conventional wisdom is that if Youngkin does 45% in Fairfax? That should be enough to push him over the top with stronger performances in Western Virginia, the Valley, and of course Hampton Roads where Youngkin has disproportionately focused upon during both the runoff primary and the general election contests.

Now obviously, Fairfax County has grown over the last 12 years by about 400,000 people — from 1.1mil+ to 1.5mil+ — which stands to reason that a theoretical maximum in Fairfax for Republicans could be as high as 190,000 votes.

It is entirely possible that Youngkin can win Fairfax if turnout for the Democrats is abysmally low. In fact — if Monmouth is correct and voter turnout models show Dem enthusiasm to be down 8 points, then that should shave off about 20,000 votes from the 2017 turnout — which at a perfect storm would put Youngkin right at 44.7%.

That is to say, if the Democratic high water mark is actually reproducible.

Of course, this is all back of the envelope math. I’m sure sharper pencils and pointier heads have got all sorts of better margins here and there. But “think long, think wrong” is a maxim for a reason — first impressions tend to be generally correct because that’s what the word generally means.

There are a lot of reasons for Virginia Republicans to hope. Getting to 53/47 is the easy part. Convincing 90,000 Virginians to come along for that additional 3 percent is a tougher sell.

Likely voters — not registered voters or random adults — are the key to the ballgame. Democrats are going to keep leaning into the ropes hoping Youngkin punches out — problem for McAuliffe isn’t so much that Youngkin’s punches are connecting (they are) but that McAuliffe seems to be punching himself harder. 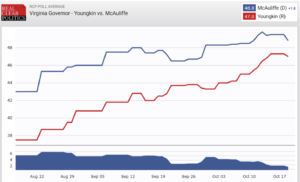 At this rate? We are on schedule for a contest that will be decided by fewer than 30,000 votes — with Northam counting the ballots and certifying the election.

Hope is a four letter word after all.