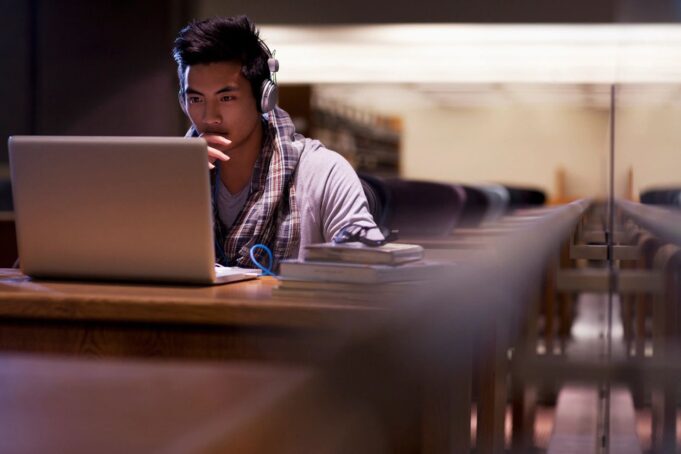 In the Myth of Sisyphus, the French philosopher Albert Camus presents the idea of the Greek hero Sisyphus rolling a boulder up a hill only to have it roll back down.  Like many of us who think that if we could only achieve that one thing and we would be happy, Camus reminds his readers that happiness lies not in the objective but in the path, imagining Sisyphus to be happy as he walks back down the mountain to begin the task again.

There is a lesson in this in a world where certification and outcomes are prized over an education — literally an ex ducare (a leading forth) — namely that the learning curve is infinitely more rewarding personally than simply landing the grade.

Unfortunately, in a world of mandatory testing, GPAs, and a pragmatic approach to just about everything, outcomes and endgames — politely termed as results — are more prized than expertise, experience, and process.

Notably, the impact of AI with regard to plagiarism is increasing at alarming speed.  While teachers and professors were once able to run papers through a plagiarism checker that scoured the internet for snippets and clips, the problem today has become more stark as AI is able to write not only news articles, but blog posts, opinion pieces, e-mail marketing pitches, news clips — even to the point of writing essays for the classroom.

The problem at present is that the technology is outpacing the ability of institutions to detect plagiarism, specifically (1) how AI right now can develop essays that will bypass most plagiarism trackers and (2) how students who pick up on this trend are going to both weaponize the tool while ignoring the wider cost — that being, not learning how to write effectively if at all.

The solutions at present are pretty thin.

The good news is that AI has a certain cadence you can easily pick up.  A high school teacher who reads an AI generated text will be able to see a basic writing style that does not match the student’s writing style.  The text is often times comparative and generic, whereas for higher level work an AI isn’t going to be able to produce the same sort of depth or nuance that human-generated work should be able to produce.  Average grades?  Certainly.  Exceptional work?  Hardly — which is good news for higher level work at the university level.

The bad news is that modern versions of AI no longer lift entire sentences; they actually write the sentence word for word.  Which means that writing for competency — a basic goal of most high school and undergraduate educators — can be cheated through the use of AI copywriters.

One potential grand solution is to make students write essays in class. Upshot is that you get their scribblings right there. Downsides are that they often plead special needs, ignorance, tease questions to get answers, or worse rush to their smartphone or watch to find the answers and repeat them on a page.

The wider question? Does AI make writing as a skill obsolete when you can effectively program an AI to say what you really wanted to say and edit accordingly?  Or worse, is the essay simply a dead letter in an era of text messaging, one paragraph e-mails, or fiction writing where the gist of an idea can be fed to an AI and the author can edit accordingly (don’t worry — coming to a bookstore near you).

This is worth putting a few brain cells behind the question.  Consider, for instance, a craftsman who begins using machinery to create a product: is the machined product somehow inauthentic because it wasn’t crafted but rather mass-produced? Is that really the craftsman’s product? Or is it the product of a machine the craftsman happens to own, maintain, adjust, etc.?  Is that person any longer a craftsman if he doesn’t intimately understand his craft in an epistemic sense, or does he become a mere technician in the more derogatory Greek sense of the word techne?  Does this technician at the machine truly understand how his machine operates? Or are they simply using the tool to produce an outcome (in this instance, a wage; in a student’s instance, a certification)?  Which then is the more educated soul — the craftsman or the technician?  The mechanic or the technician?  The doctor who intimately understands his craft or the medical assistant working off of a check list?

One wouldn’t call a student a master any more than one would call a technician a mechanic. Yet do students really need to know how to write a paper? Are we back to pop quizzes? Busy work? Specific short paragraphs on what they read turned in before coming into class (which work, but as a student are annoying as all get out)?

Either way, the demise of essay writing should strike most as a certain kind of poverty.

The wider problem where students can avoid learning how to express an idea in writing using AI with few tools available to teachers and professors to enforce some intellectual rigor and discipline is a serious problem that can’t be fixed with busywork and more quizzes.  What is needed are solutions that engage the student into the process of learning rather than the production of outcomes.  Some wider thoughts:

Students who utilize AI to write their essays — and the ability to clearly express and defend an idea in an essay form should be and should remain a critical part of anything worthy of being called an education — do indeed cross a line precisely because the grade should reflect a student’s ability to replicate a process of critical thinking, not a one-off theft of ideas from someone else’s programming skills.

Of course, in a pragmatic society where getting the result is more valuable than the process of getting there, we have uniquely created a problem where everyone consumes and no one truly creates or understands.

Developing a no-tolerance policy for BS writing from AI is going to present a serious challenge for educators over the next five years, one that will require educators to change how they approach the profession and their students in an increasingly tech reliant world.