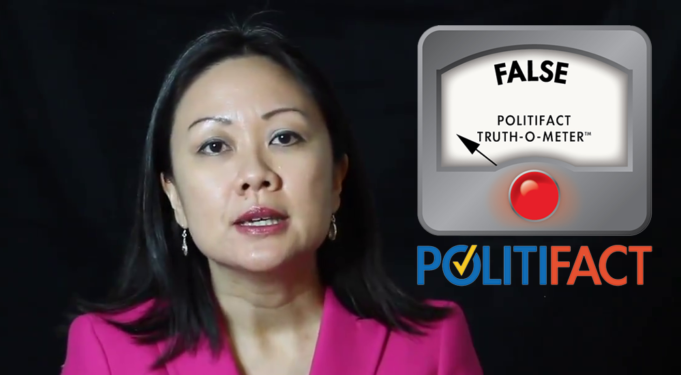 Virginia captured the national media spotlight last week after committee testimony by Delegate Kathy Tran (D-Springfield) went viral, in which she explained, in stunning detail, the provisions of her bill substantially loosening restrictions on third trimester abortions up until the point of birth.

After deleting her social media accounts, Tran returned to Twitter days later, sharing a video in which she claimed to have done nothing to change the standard under which abortions through 40 weeks would be allowed in Virginia.

“Right now, women are able to access an abortion in the later stages of the pregnancy under certain conditions with approval of medical doctors,” said Tran “I’ve done nothing to change that.”

“She introduced an unsuccessful bill that would have eased Virginia’s abortion restrictions for all pregnancy stages,” they wrote. “In the final trimester, state law requires three physicians to certify that a continued pregnancy would either kill a woman or ‘substantially and irremediably’ damage her mental or physical health.”

“Tran’s bill would have lowered the requirements to one physician certifying that the pregnancy would damage the woman’s mental or physical health – the ‘substantial and irremediable’ test would have been repealed,” continued Politifact, before concluding that her claim was entirely false.

Politifact’s ruling was based on the clear statements made by Tran herself, in her subcommittee testimony and response video.

Shortly after she posted her response, the Virginia House GOP tweeted a video illustrating the contradiction in Tran’s own recorded statements.

.@VAHouseDems are trying to say “they have done nothing to change” the requirements for late-term abortions…. Oh Really?? pic.twitter.com/bebtyzAHhe

In Tran’s subcommittee testimony, she acknowledged to the panel that her bill would indeed change the standard for third trimester abortions, currently only allowed under exceptional circumstances, such as saving the life of the mother, and only with the certification of three doctors.

“You do acknowledge that you substantially change the standard, by removing a couple words here, correct?” asked subcommittee chairman Todd Gilbert (R-Shenandoah). “Line eighty, you are changing the standard under which the judgement call is made.”

The proposal to change the standard proved too extreme even for many pro-choice Democrats, including former Governor Terry McAuliffe, and US Senator Tim Kaine, both of whom distanced themselves from Tran’s bill, even though it earned support from Governor Ralph Northam, Lt. Governor Justin Fairfax, and Attorney General Mark Herring.

As of last week, 54% of Virginia’s Democratic lawmakers — a majority — had sponsored the measure, through Delegate Dawn Adams (D-Henrico) removed herself as a sponsor following an email she sent to constituents claiming she hadn’t fully read the bill before signing on.

Currently, 34 Democratic lawmakers remain sponsors of the measure, which failed to advance out of committee this year.

Governor Northam has pledged to sign the bill if it reaches his desk, which could happen as soon as next year, if Democrats win House and Senate majorities in the fall elections.