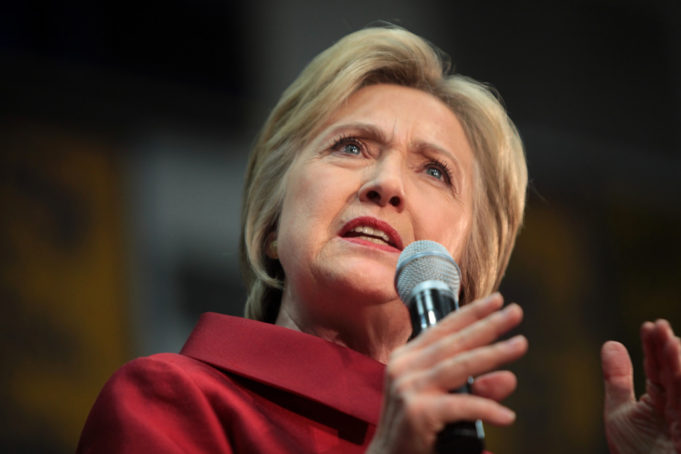 I’m beginning to think every speech by Hillary Clinton should be counted as an in-kind contribution to the RNC.

Her never-ending therapy tour still trying to blame everyone in the country besides herself for her resounding Presidential loss in 2016.  I think she has avoided blaming Obama, but that’s about it.

After this last speech, even Democrats are wishing she’d go away.

“Even some of Clinton’s own former aides and surrogates say the former Democratic presidential nominee should back away from the discussion about her failed campaign because it’s harmful to the party.” (The Hill)

Her latest analysis is that she won on the coasts, and the states in between are a bunch of racist, sexist people who really don’t matter to the economy.

How she didn’t use the word “deplorables” I’ll never know.

“I won the places that are optimistic, diverse, dynamic, moving forward,” said Hillary.

Oh, and she says her loss was women’s fault.

Yes, she claims that married women were supporting her in droves, until their mean, nasty husbands got a hold of them and made them vote for Trump.

Is that Hillary’s view of marriage?  Has she always just kept her opinions to herself and voted how Bill told her to vote?

It astounds me that someone who thinks so little of most of the country wanted to be its President, but here is Hillary bashing people in most of the states and every married woman in America as weak, hateful, and ignorant because they had the audacity to vote for someone besides her.

There’s a reason she gave this sad speech in India and not in Pennsylvania’s 18th district.  I doubt people in that district would embrace hearing that they are economically irrelevant to Hillary because they aren’t New York or California.  As far as she’s concerned, Pennsylvania voters are a bunch of racists who picked Trump over her.

If only she made this speech a few days earlier, maybe the results in that Congressional race would’ve been better.

Keep talking, Hillary.  Write another book.  Go on a speaking tour.  Heck, the RNC should sponsor it.  Keep whining about how everyone in the country is a hateful dunce because they didn’t vote for you.

Maybe Hillary can be the key to the Democrats losing in 2018, too.